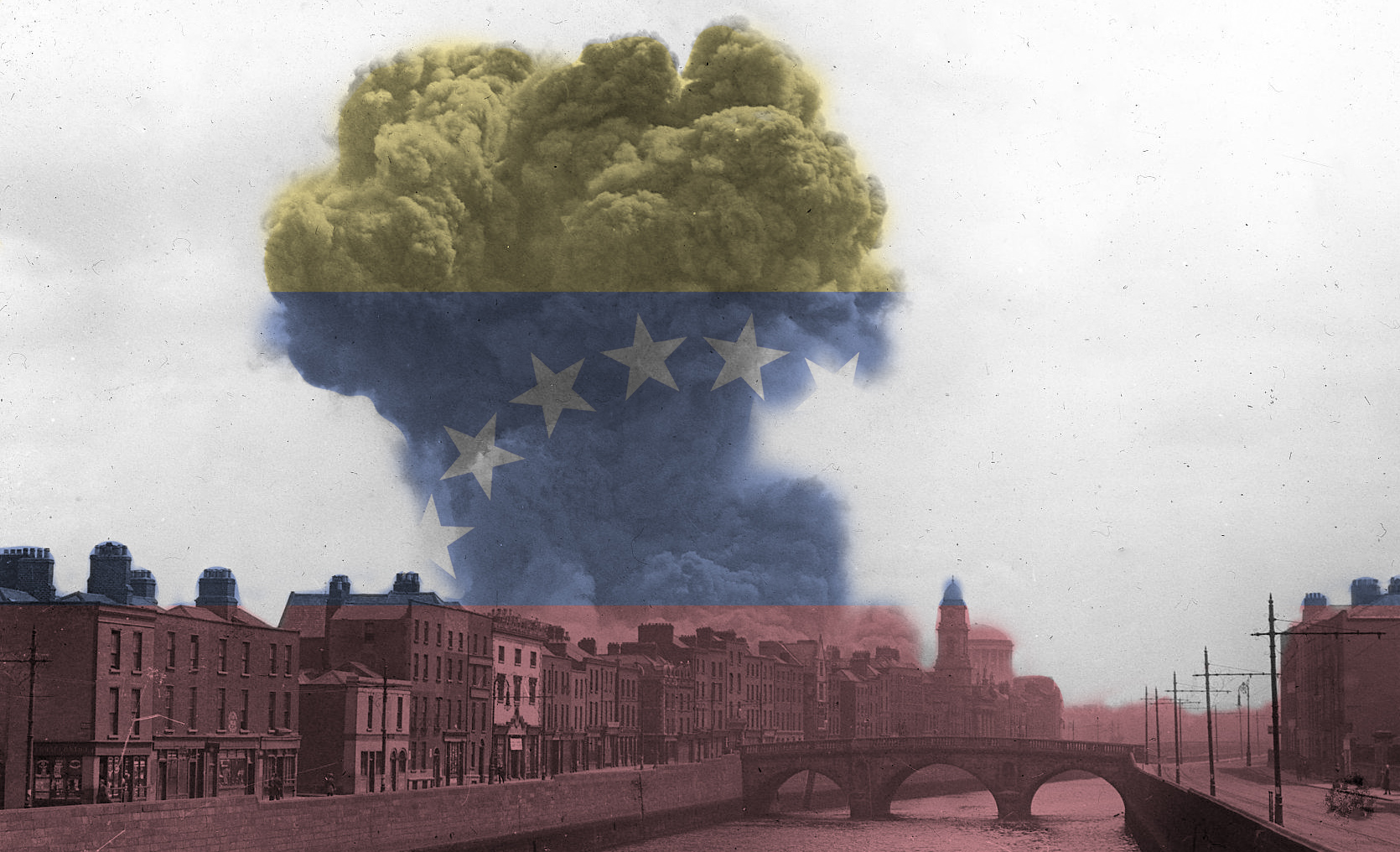 When it comes to Venezuela, it can often seem a distant issue to many working Irish people, even to those of more republican persuasions, but actually what we’re seeing around the world is what we’re seeing today at home. From foreign nations undermining our democracy, organisations meddling in our island’s funds or resources, to media propaganda and military puppeteering. Our small rock on the edge of the Atlantic has seen all of these things in the past and they will define our future if we allow them. Even while peacefully playing the Western capitalists’ game, the Irish people have yet to be gifted the ink by neighbouring empires to write our own destiny.

Should our oil resources not have already been sold to private interests (first in 1958 for £500, then oil and gas royalties abolished in 1989), we may have found ourselves under the warmongering thumb of the US, much like a lot of the middle east and south America. Even without it, the US / NATO has founded a de facto military base at Shannon Airport. They’ve pressured a neutral nation to organise and transport soldiers to their proxy wars and airbases around the middle east. During the height of the Syrian civil war, Shannonwatch documented US Military coming to and from Incirlik Air Base in Southern Turkey, breaching Irish neutrality.

As a nation, and often against the will of our politicians, we’ve found ourselves clashing with the European Union, only to have our democracy undermined as a result. When the EU was looking to expand eastwards, internal rearrangements came in the form of the Treaty of Nice in 2001. Due to the fact our constitution of the south can only be changed with a referendum, it was put to a people’s vote and rejected. Elites in our neighbouring nations, with the help of our own elected representatives, ignored the result and went about a second vote the following year with a more successful campaign. Similar happened in 2008 with the Lisbon Treaty and a campaign of re-education to better suit the beliefs of the European Empire followed. A union of commerce dictated laws to a sovereign nation. Democracy is not respected.

From the founding of the first Fascist body known in history, the Orange Society, to the current British border in Ireland, it’s our relationship with our neighbouring isle that defines our understanding of Empires. If we had politicians that disagreed with Westminster, they were arrested. If their foot soliders and officers embraced the Irish people and embedded themselves into the land, another invasion would follow. If a culture of republicanism or proletarian unity began to grow, it was hammered out with not just armed forces, but with sectarianism and government sanctioned violence between communities. If a civil war erupts, they decide the victors. If disaster struck us, we were left to starve or simply worked to death. Empire knows no empathy.

We, as Children of Rebellion, against Empires of Power & Greed, express our fraternal solidarity with struggling people’s of the world against those who undermine your right to peace and sovereignty.

And to workers liberation across the world!