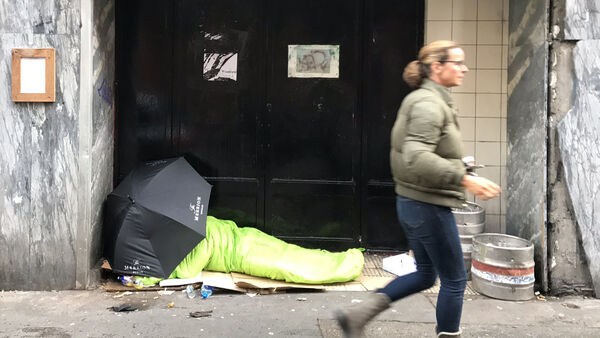 I overhear a woman on the DART –
I swear this train gets later every day.
She goes on to tell the man across from her
She’s on a part-time flexible contract,
But they’re so short staffed she’s working 6 day weeks.

I lose count of how many doorways I pass
Semi-sheltering shivering bodies in blue sleeping bags.
The last is the loading bay of the hotel.

As I’m clearing the first table of the morning
A homeless man walks in and asks for coffee.
He’s promptly escorted out.

Between keeping the buffet stocked
With twice as much food as the guests could ever hope to eat,
My manager asks how I met my boyfriend.
She loves the story.
As I wait for four orders of over-easy eggs on avocado toast,
For the Americans upstairs who are here to visit the Guinness Storehouse,
One of the chefs argues at length that love like ours
Is a symptom of mental illness.

When I bring up his coffee and pastries
A man on the 3rd floor starts rooting through the pockets
Of jeans and jackets thrown about the room,
Eventually he presents me with a tip the equivalent of an hour’s pay.

Once the guests have had their fill
Staff members filter through the kitchen picking up leftovers.
Later, as I tip the remains –
Enough rashers, sausages and pudding for four family match-day fry-ups –
Into the food bin,
I overhear the breakfast chef –
Not a lot of waste today guys, good job.

On our smoke break
He tells me he can barely support himself on his wages.
Some say it’s capitalism’s fault, but socialism would make things worse –
He continues after trying to convince me
Climate activists are causing inflation.

As I snake my way through the corridors
Picking up barely touched room service trays,
Three-quarter full bottles of hundred euro wine,
Empty complementary champagne glasses,
I catch glimpses of the rooms.
Each with private bathrooms
Bigger than any you’d find on daft.ie listings.

You know the big store room downstairs? It used to be a nightclub –
My co-worker tells me as we close out the last hour of the shift,
Folding hundreds of white linen squares
Into cutlery pockets for the wedding this weekend.

As I make my way back to Tara Street I swear I pass
More student accommodation and hotel construction sites,

More closing-down signs,
More parachuted-in street-preachers,
Than I did yesterday.

Welcome to Dublin banners fly along the Liffey.
A Garda public order unit van speeds by.

1 thought on “Welcome to Dublin”