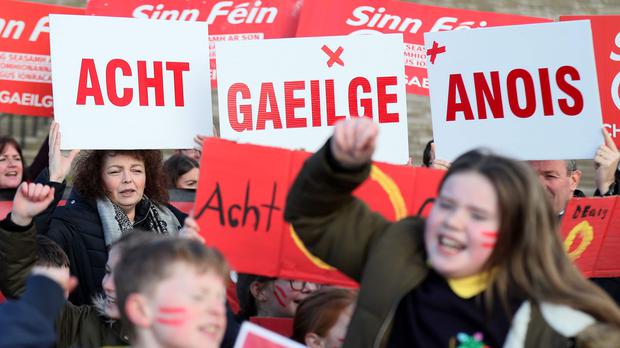 A language revival has a lot of similarities with a revolutionary movement.

Why is this? A language that has no community usage is an academic pursuit, as much a part of the life of working people as Latin. For a language to re-emerge, to be used daily by the entire nation, it must first be used daily by one household, one street, one place of work. A language must take root, develop within a community and become indispensable to its people. It would not be possible for a vanguard party to seize state power without the support of the people, support that is developed through protracted struggle. In the same way, it would not be possible for a language to become the primary language of the nation without first being developed as the language of communities across the nation. Support for the language emerges from below, in much the same way as support for the revolution.

Just as a revolutionary movement cannot grow without the active work of a vanguard party, a language revival cannot happen spontaneously.

Why is this? A language revival requires constant diligent work from activists to ensure that the language is protected, used, and promoted within a community. A revolutionary movement, without the guidance of a vanguard party, will splinter, peter out, and disintegrate. Similarly, language revival, without constant work will become a hobby for a handful of those interested in cultural preservation and will ultimately fall by the wayside. Only a well-organised campaign can successfully begin to grow a linguistic community. Only when activists are holding public free study sessions, demanding public areas include minoritised language signage, speaking and writing publicly in the minoritised language will that language begin to become the community language.

Why is this? A language movement that is confined to a specific geographic area with no hopes of expansion is a language movement that is accepting its own demise. A language movement that confines itself to a specific region in the hope that this will be enough to preserve the language will see that those people who speak the minoritised language and the imperialist majority language will leave for areas in which the imperialist majority language is spoken, as jobs will be more abundant and wages will be higher in these areas. Just as a revolutionary movement in the stage of protracted peoples war must be in constant struggle with the capitalist state in order to have hopes of success, the language revival movement must attempt to constantly expand into new communities, building deep roots within them and ensuring the language becomes the primary language of those communities too, before moving on to expand into new areas. A stagnant language movement confined to one area of the linguistic nation will always be in competition with imperialist majority language speaking areas and will compare unfavourably in employment and wages. An active language movement, in constant struggle to expand into new regions, will only be in competition with those who actively resist the expansion of the minority language. Comparison of wages or employment will be less of a problem, because the areas with high wages and high employment will soon also be a community where the primary language is the minoritised language.

Why is this? A revolutionary movement must be driven by a vanguard party with a proper understanding of Marxism-Leninism, or else will suffer the same pitfalls as historic revolutionary movements that did not learn from previous struggles. In much the same way, the language revival movement must be imbued with an understanding of the functions of the minoritised language, its history and the reason for the importance of its study. Any revolutionary vanguard that does not study Marxism-Leninism will be condemning themselves to an ideological dead end, strategic mistakes, and in all likelihood failure. Similarly, any language revival movement that does not study the language, its history and its political importance will condemning themselves to this same failure.

The similarities in the way we construct revolutionary movements and language revivals is not coincidental. Both are community lead, anti-imperialist movements. Both require broad public participation. Both are the cause and duty of communists in the peripheral, imperialised nations of the world. When done correctly, both a revolutionary movement and a language revival movement should be anti-imperialist, anti-capitalist, and conducted in tandem. This is true of our Irish context and is equally true for revolutionary movements around the world that base themselves within nations whose indigenous languages have been minoritised.