Much of the contemporary discourse surrounding events like 9/11 was framed under cultural conflicts, primarily in terms of Islam versus Western values. Those who enacted the attacks were charged with simply hating the “freedoms” the West had, these groups were guided by religious fundamentalists who could not be reasoned with and their outburst of violence was without any real reason or logic. The attacks on the twin towers presented a new opportunity to the West who had long sought to bring the region (which was seen as dragging its heels) into the liberal hegemony. As such the conquest of the Middle East was initiated. Afghanistan and Iraq were laid to waste, numerous regimes were toppled all of which led to fertile ground for increasingly radical Islamic groups to take hold and indoctrinate the youth into fighting and dying for radical Islamic ideology.

A contradiction emerges here, the West who had been attacked by Al-Qaeda and claimed that such an attack was rooted in an emerging cultural conflict also accelerated the growth of radical Islam by destroying the Middle East. This contradiction gives way to the real reasons why the attacks occurred, or at least one of them which has been excommunicated in contemporary discourse. It’s no secret that Israel benefits from an unprecedented alliance with the US. It sees Israel receive unlimited economic, diplomatic and military support justified by the argument that Israel is a key ally in the region and that Israel is a vanguard of liberal democracy in a region that so badly needs it. Israel plays the key role of a geopolitical lynchpin and launching point for American influence. This additionally has further overtures of pandering to religious sentiment in the US where homegrown Christian fundamentalists see the ascendancy of Israel as a key aspect of the fulfillment of biblical prophecy. Such an alliance is maintained through aid, the US working class are expected to fund the Zionist colonisation of what’s left of the Palestinian territories. It’s estimated that each Israeli citizen receives $500 dollars annually in US taxpayer funds.[1] Israel is a modern-day industrial power and yet is the largest beneficiary of US aid.

The wealth siphoned is given on an unconditional basis, Israel has the liberty to spend it on whatever it deems suitable, a stark comparison to other impoverished states who are drowned in debt and can only use such aid to liberalise their economy on strictly defined terms. As such much of the taxpayer wealth goes to the increased funding of illegal Israeli settlements.[2] A morally bankrupt project that furthers the colonisation of what’s left of the Palestinian territories. The settlements have been used to destroy and disrupt Palestinian culture and life. With Israelis moving into these new complexes, subsidised by US money.

Palestine has been one of the roots of broad Anti-American sentiment in the Middle East, particularly America’s seemingly unlimited support for Israel. As previously said, cultural conflicts which fueled xenophobia and hate were used to explain why Al-Qaeda attacked America, of course this is a lie that hides the true culprit. Bin Laden according to his mother had been struck deeply at a young age by the plight of the Palestinians, he was “concerned, sad and frustrated about the situation in Palestine”.[3] It’s worth noting that Osama Bin Laden frequently cited Western authors, rather than Islamic religious authorities, when explaining his opposition to the United States. Examples include the late Robert Fisk, and the annals of US imperialism contained in William Blum’s opus – Killing Hope. Clearly Anti-Americanism in the Middle East can’t be explained solely through the prism of religion, and the simplification of complex geopolitical processes to religion is part and parcel of the overarching divide and conquer narrative of imperialist powers.

Palestine had been a key issue from the start for Bin Laden, his first fatwa (an Islamic ruling) coined a phrase the “Zionist-Crusader alliance”.[4] The 9/11 commission also mentioned how deeply rooted Imperialist support for Israel was in explaining why the attacks occurred, the investigation discovered Bin Laden had wanted to accelerate the date of the attack in response to Ariel Sharon’s controversial visit to Temple Mount, the site of the al-Aqsa mosque one of the most holiest sites in the Islamic religion. Furthermore, the Bin Laden originally wanted the attack to be at Capitol Hill, which was deemed as the “source of US policy in support of Israel”.[5]

Of course those in the Arab world who are horrified by the suffering of the Palestinian people aren’t limited to religious extremists like Bin Laden and ISIS. Shibley Telhami, a Middle East expert points out that no other issue resonates with the public in the Arab and Muslim world “more deeply than Palestine”.[6] There are also many secular traditions of politics in the Arab world that are equally anti-American, many of which have drawn more sustained aggression from the US than Islamic extremists themselves. This issue is also the fundamental factor that shaped American perception in the region. Another academic in the field Ussama Makdisi is in agreement, stating Arab anger towards America is nowhere “more widely and acutely felt than that of Palestine”.[7]

Since the 9/11 attacks the narrative shifted, commentary around the event has modelled discourse into one that focused on a clash of cultural beliefs, Islam was at odds with Western Liberal values it goes, it is thus inevitable that there was a rise in Islamophobia and Xenophobia directed to the Muslim communities in the West. However, the attacks were caused by the very real Imperialist interests and actions in the Middle East and the Western collusion with the Zionist colonisation of the Palestinian territories. It also exposes many of the Zionist arguments that Israel is a key ally of the west against global terrorism, the reality is that it’s one of the causes of it.

Uyghurs and China: The Facts

Ukraine to Belarus: Who Benefits? 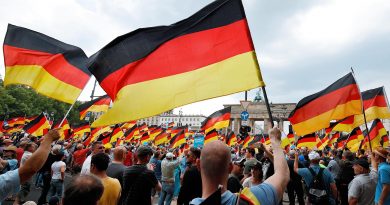 Social Democrats Have a History of Supporting Fascists