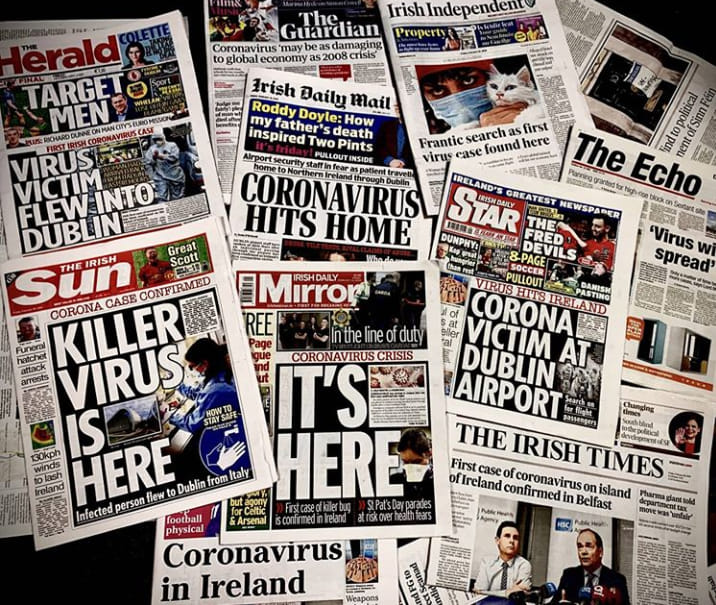 In 1998, a British ex-physician published a piece linking the MMR vaccine with autism, he was proven wrong by numerous studies since and found guilty of scientific fraud. Also in the late 90s, the manufacturers of all-natural personal care products began rumours of a popular shampoo foaming agent causing cancer, this was debunked long after they made their money. US Vice president, Joe Biden, advised citizens to avoid confined spaces, such as airplanes, during the 2009 swine flu pandemic – although even the World Health Organisation had to admit that ordinary flu strains caused more deaths in the same year. Currently, West Africa is experiencing its second biggest Ebola epidemic, yet it was the 2014 outbreak, with the help of numerous misleading books and media spin, that saw schools closed across the US, sick people quarantined and ‘Ebola’ shouted at African sports people. Only a handful of cases were ever reported in the US. So, as Coronavirus (COVID-19) touches down in Ireland in the middle of flu season, it’s time for another round of hysteria.

From the most recent statement of the Irish Health Service Executive: ‘The risk of catching coronavirus in Ireland is still low. This may change’. Why would a public health care entity be speculating a ‘change’, is it for public caution, is it for a lack of understanding of the virus or is it to suit the narrative? Ultimately, we’re so over encumbered by horror stories of our doom (which never come true) that when state bodies or media enterprises unleash the newest extinction event, numbness is a growing response.

Before Covid-19 made its way to Europe, we were already done for. According to popular discourse, ‘having a full beard puts you at higher risk, it’s deadlier than SARS, there’s bacteria in Chinese parcels and it was almost definitely started because of all the dogs they eat over there. Like, how could they eat dogs? That’s karma for you!’

Sensationalist (social) media is click-bait at best, xenophobic victim-blaming at worst. It creates public confusion and often hides useful information, like symptoms or precautions, from general knowledge. Chats over pints turn into jokes about old school friends in danger while abroad, and scaremongering further terrifies the many parents of Irish emigres.

Complex subjects, particularly those of a scientific or political nature, are most commonly sensationalised. So much so that we end up with a Media Who Cried Wolf situation. When every trending disease around winter time is looking to wipe out humanity, one that actually could, would be impossible to ever believe.

Irresponsible media also adds further damage to any attempt to appropriately tackle the climate crisis. When the press almost exclusively publishes the most click-bait-able scientific reports, not only do we struggle to get a good analysis of the changes in our climate, we struggle to take real danger seriously.

Newspapers, television and even tweets play a vital role in informing people of what’s really happening in the world. This is impossible to achieve when profit-driven sources dominate public information. Unfortunately, sensationalist or fake news does make more money, it does get more interest and it does play on our guttural reactions to fear and anger – often due to our own ignorance on a topic or country. Humanity’s urgency to defend ourselves and our loved ones from danger is played upon by these scaremongering tactics.

Any institution beholden to amassing profit, i.e. to its shareholders and advertisers, should never have the power to (mis)educate en masse like we see media infrastructures have today. In 2018, Mark Zuckerberg testified in the US Congress following Facebook’s complacency in spreading extremist propaganda, fake news and meddling in elections. When will we be calling out Denis O’Brien for Independent News & Media, which holds an 85% share of the evening newspaper market along with Communicorp’s 20% share of the radio market? What about Aberforth Partners llc, head shareholders of Reach plc who own Daily Mirror, Sunday Mirror, The Sunday People, Daily Express, Sunday Express, Daily Star, Daily Star Sunday as well as the magazine OK!? How about Twitter lead shareholder, Evan Williams? Surely negligence and misinformation, which endangers health or spurs on racist violence, should see the likes of Rupert Murdoch stand trial? When will we be calling out RTÉ’s close links with religious groups and the landlord politician class?

If not, the onus falls back on us to either A) educate ourselves on the influence capital has on mass media and/or B) fight to restrict their power and influence, to break up the news monopolies, remove any influence from church or neoliberal state and to remove profit as a driving factor in the education of society.

Even a European United Left/Nordic Green Left 2016 report recognised media monopolies in the 26 counties: ‘Ireland has one of the most concentrated media markets of any democracy. Accumulation of what has been described as “communicative power” within the news markets is at endemic levels, and this, combined with the dominance of one private individual media owner in the State, creates what the Media Reform Coalition has described as “conditions in which wealthy individuals and organisations can amass huge political and economic power and distort the media landscape to suit their interests and personal views.”’

When a publication or politician shouts “the country is done for”, to quote Jean-Paul Sartre’s preface of The Wretched of The Earth, “it is emotional talk; burning with love and fury, the speaker includes himself with his fellow countrymen. And then, usually, he adds, “Unless…” His meaning is clear; no more mistakes must be made; if his instructions are not carried out to the letter, then and only then will the country go to pieces. In short, it is a threat followed by a piece of advice”.

That minority of wealthy elites, who own a majority of our news sources, don’t give us advice, they threaten us. Fear keeps us in our place and keeps us consuming. They tell us to be afraid when we should be brave and while our trust in the news is at an all time low, which is great for breaking down the cultural hegemony of the state, we must actively question where information is coming from more than ever before.

In times of pandemics or crises, misinformation costs lives. Shut down those behind it, promote the facts and demand justice for those who die or are harmed as a result of profit-hungry shareholders and advertisers.