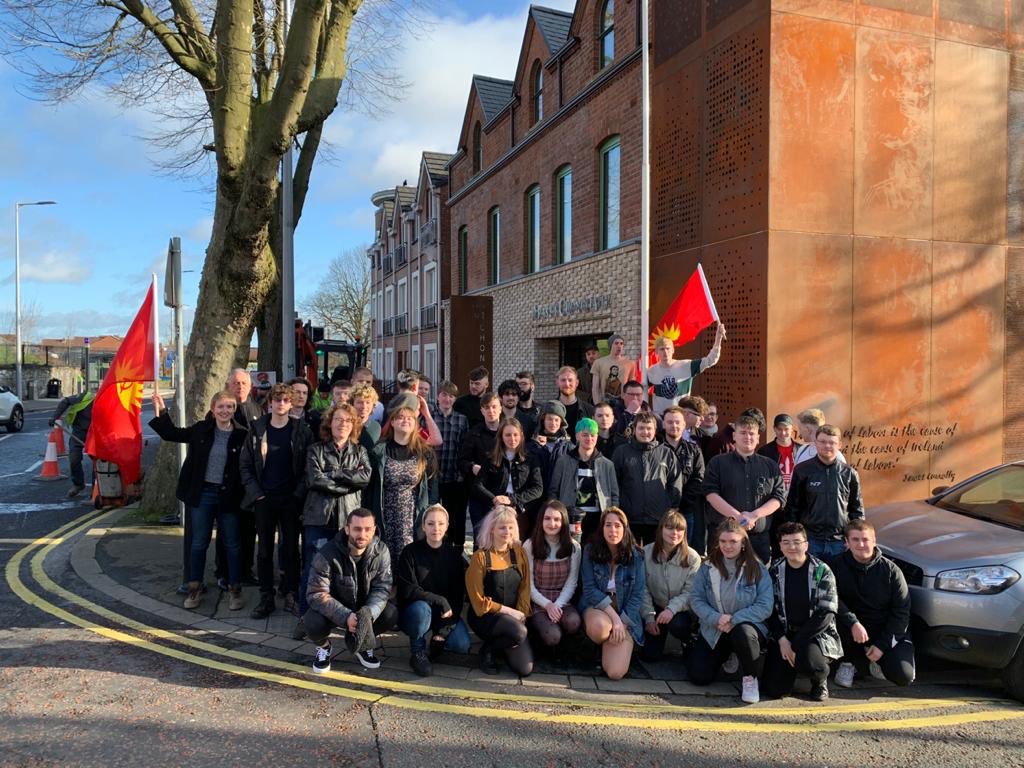 The 29th of February only comes around once every four years but this lucky leap-year it was host to a special annual event. From every corner of our island young communists came to Belfast’s Áras Uí Chonghaile, a building dedicated to the man whose name and memory we gathered under. Some tired from hours of traveling, all were ready for a weekend of discussion, learning agus craic. Thronged outside the Connolly Visitor Centre on the Falls Road, red flags flying, there could be no mistaking what was to take place – Connolly Youth Movement’s 2020 Ard Fheis. Outside the venue, smiling and laughing, was the largest gathering of our organisation in decades – a living testament to our recent resurgence, a manifestation of our tireless work to agitate, educate and organise our class. Focused on our branches, on the minutia of daily organising, the broader effort we are integral to can occasionally be forgotten. Yet on that bright Saturday morning there was a general understanding among us of what we are contributing to and building.

Not only was this Ard Fheis an inspiring milestone in marking our recent surge, it was also an important milestone in the history of our organisation. Fifty years ago, in 1970, the northern and southern communist youths united to become one – the all-Ireland communist youth organisation, CYM. We dedicated this special Ard Fheis to the memory of Madge Davison, our first general-secretary and a dedicated organiser during one of the most turbulent times in Belfast’s history. As the struggles of our time kick off and intensify we hope to be ready to act effectively and with principle, as Davison and her comrades did during the civil rights movement and the ensuing conflict. Locked in manifold discussion for hours we will attempt to formulate exactly what is the most effective and principled way to act for the conditions of our time.

In 1970 she took part in the breaking of the Falls curfew, when several hundred women marched in protest at being held within the area by the British army. By the 1970s she had begun work as full-time assistant organiser for the Northern Ireland Civil Rights Association, based in an office on the corner of Castle Street and Marquis Street. Many of her party comrades—including Betty Sinclair, Barry and Terry Bruton, Jimmy and Edwina Stewart, Joe Deighan, Lynda Walker, Margaret Bruton, Joe Bowers, and many others—also played a significant role in this organisation. She helped to drive the well-oiled machine of the NICRA, organising meetings, rallies, leafleting, paper sales, and street committees.

Madge was strong in her support for the republican ideals of the United Irishmen, and it was in Bodenstown, Co. Kildare, site of Wolfe Tone’s grave, that she met her future husband, John Hobbs, a communist from Dublin. She always loved the north side of Belfast and later in life wanted to move back there, under the shadow of Cave Hill.

Madge Davison was an outstanding communist, outstanding orator, and excellent organiser. During her short life she took part in many struggles and activities. She taught typing in Twinbrook, taught law in the Falls Women’s Centre, was an active member of the Irish Anti-Apartheid Movement, an adviser to the Rape Crisis Centre (Belfast), and a member of the Northern Ireland Women’s Rights Movement. Her comrades and friends will remember her for years to come.
– Communist Party of Ireland [ http://www.communistpartyofireland.ie/s-davison.html ]

In attendance for the day were two comrades from the Young Communist League, our sister organisation in Britain and many other young communists from across the globe sent their fraternal greetings. All of them seemed to suggest the same idea: that we are not alone in our efforts to build a better world – around the world there are many more giving their lives to the same goal.

Once the chatter ceased, and a round of introductions given, a comrade from Cork gave a brief talk on democratic centralism. For anyone not yet sure what this means, the events of the day made it clear. Freedom of discussion, unity of action. Comrades discussed and debated amendments and motions put forward by ourselves weeks prior. Nobody’s voice was above any other. If the room was convinced of a motion it would be voted through and become part of our programme, something which we were bound to collectively act upon. Likewise if the majority disagreed it would not be enforced. However once we’ve decided on something we act as one to achieve it. Our mandate comes from ourselves, open debate and discussion drawing us to unity. I challenge the reader to find a political organisation on our island that operates in so democratic a manner.

Amendments and motions, both minor and major, were churned through rigorous examination and debate. We affirmed our solidarity with socialist countries and revolutionary, anti-imperialist projects. We reasserted our commitment to trans rights, more precisely formulating the issue of healthcare access on our programme. We put forward that Socialist-Republicanism is the expression of Marxism-Leninism in Ireland, and further avowed republican principles by increasing the usage of the Irish language along with improved statistics on the conditions in the 6 counties. A motion inviting our membership to engage in self-defence training was unanimously passed, as was a motion to carry out organisation-wide study of and better education around decolonisation, travellers’ rights, and sex work. In the end all were satisfied with a stronger constitution and programme – some were already considering new amendments and reformulations for next year.

Besides all this there were a great many chats and chants, a tour of West Belfast, a table quiz, a late night, and many bleary heads for a talk on the North and sectarianism with Trademark the following morning. We were wrecked yet recharged all the same. As our general-secretary, elected for another term, asserted in his closing speech, this will be our decade, a red decade. Surrounded by so much creativity and energy, knowledge and dedication we felt we could reach out and grab it.

We do not know where our next Ard Fheis will be held, but, as we continue to grow and strengthen, we are certain that we will need a much larger hall come this time next year.