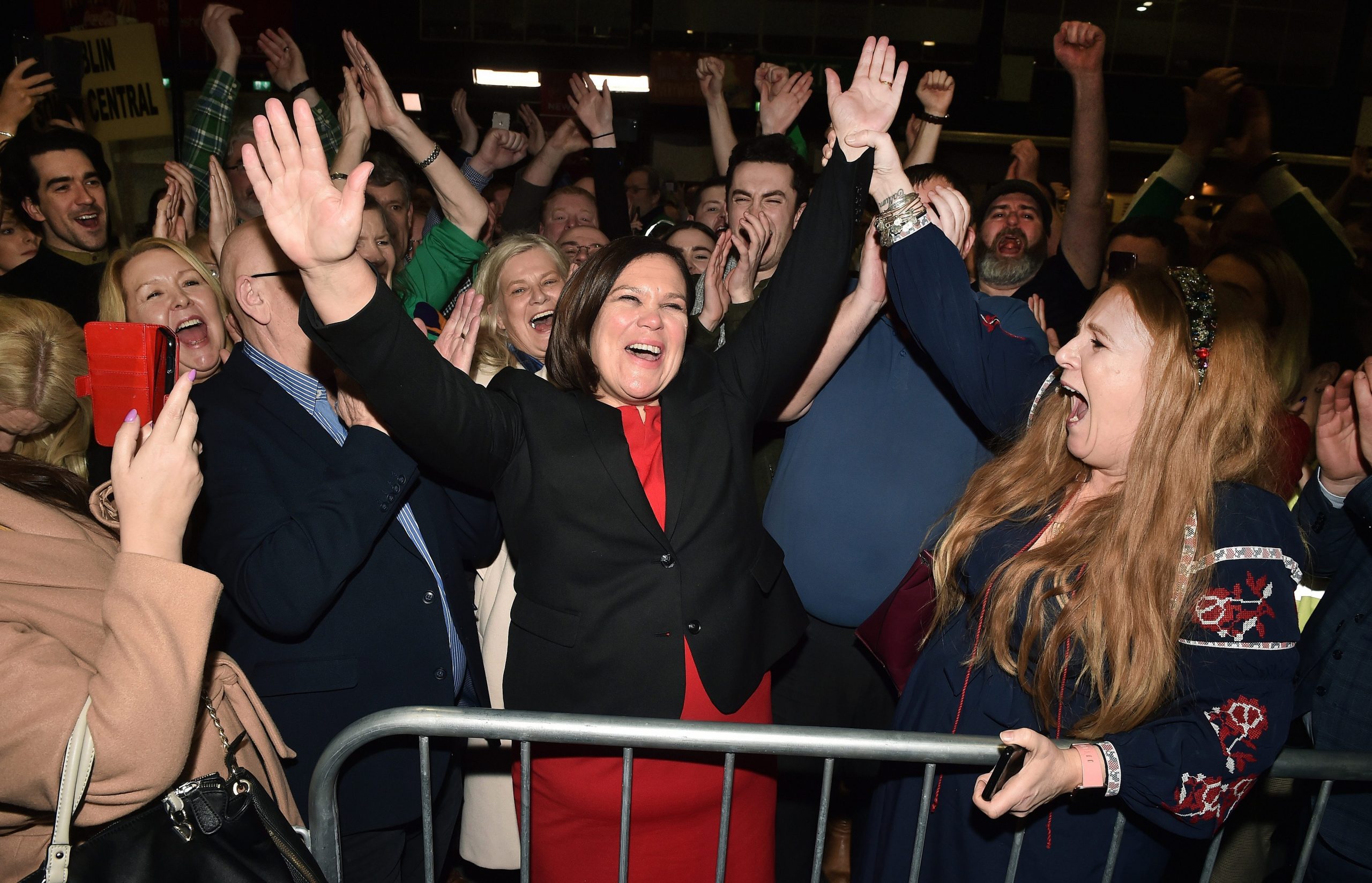 As we make our way back to work or college this week, no new dawn falls on Ireland. It still holds dominion status to the interests of finance capitalism, vulture funds and an unregulated banking system backed up by an unregulated and unaccountable parliament.

But didn’t we vote?

We did vote. Terrific results, especially by way of undermining the Blueshirt regime, which seems to have come to an end. However, voting is not, as some would say, a full expression of democratic rights, but the expression of a limitation of our democratic rights. The vote does not consider the sort of system we want, nor to find resolution to the economic woes we’re facing. The vote did not put neoliberalism or capitalism up for debate. It only offered a simple question of ‘which candidate do you hate the least’.  That’s something worth considering when the media spinsters weave their webs around Sinn Fein and the topical theme of democracy.

It is early still to gauge what exact combination of political parties will form government but a few things are clear. Firstly, young people continue to stand in the tradition of the 2011 and 2016 elections by overwhelmingly voting out the two main establishment parties in the south. The share of the vote between them has slumped once more and this is a small victory that we can rejoice in. Fianna Fáil and Fine Gael, who oversaw a Catholic theocratic state which enslaved women and concealed the mass murder of children born outside of wedlock, are slowly being chipped away at. Perhaps for us it isn’t fast enough, but there is a generational swing. 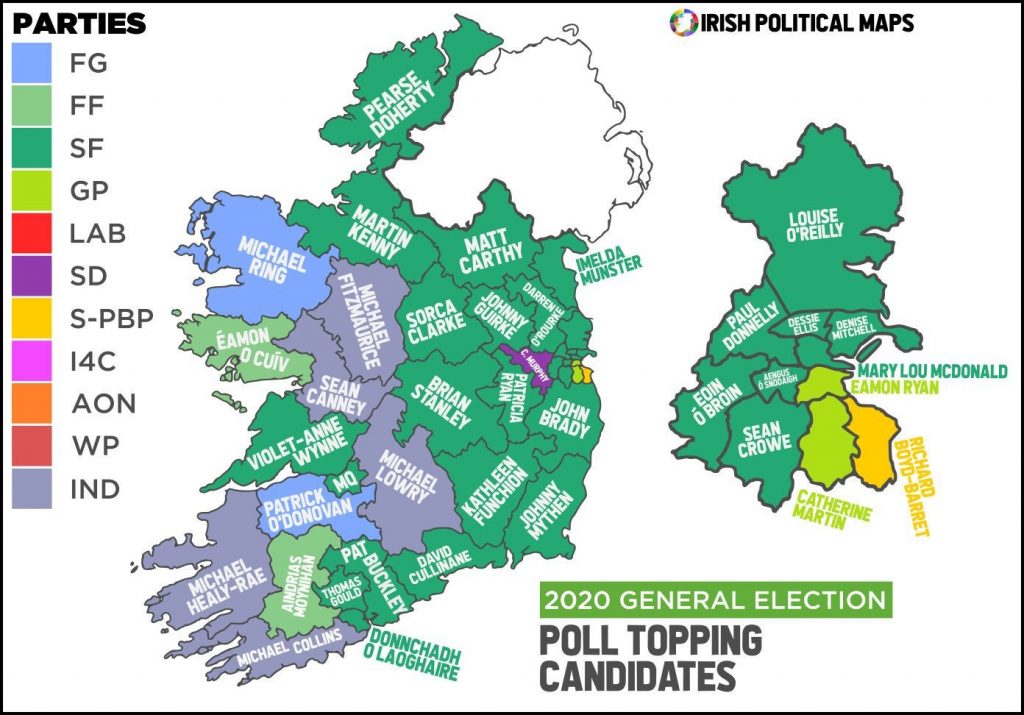 Why did young people vote the way they did?

An inflammation of political views took place earlier on this year, when the State decided in all their wisdom to ‘commemorate’ members of the Royal Irish Constabulary on par with members of the Irish Republican Army that fought against them. Disagreements and protests followed. The RIC, the Black and Tans and the Dublin Metropolitan Police might have had Irish people in it, but its social and political function was to repress the right to self determination of Irish people in the most brutal manner. This demonstrated, not only how completely delusional Fine Gael were and are about the people they lord over, but also from which social class of people they come from. The base of support for Fine Gael is rooted in the exact sort of people who would have been against any form of national revolution that went beyond changing the colour of the flag. It is no surprise that the continued rehabilitation of the occupation forces is part of their strong attempts to revise history.

This clash over historical revisionism placed the entire country into perspective and highlighted the existing problems, particularly in the fields of healthcare and housing.  The voter turnout reflected a desire to see those problems solved. A material, concrete problem receiving a material and concrete answer. Sinn Féin presented a programme which focused on the issues people felt impacted by the most and were most aesthetically connected

Numerically, it appears that no single party has capacity to form government. Immediately this undermines their ability to carry out their full programme for government. Negotiation means dilution and this occurs all the time. It is possible that tweaks and quick fixes will be offered to the more chronic problems facing Ireland and working class people will temporarily get more breathing room. This does not however render Ireland immune from the incoming financial crisis, nor does it control and impede capital movement in Ireland nor does it offer any tangible long term defining features as to how we will construct socialism in Ireland.

While on Twitter, Facebook or Instagram members of Sinn Fein/PBP/Solidarity/Workers Party bang on about their promises of socialism, what we see are modest programmes aimed at regulating the worst elements of capitalism. Their programmes aren’t programmes for socialism. Not because they’re lacking a focus on taxing enough or any other measure of redistributive wealth measures, but because they do not challenge the economic method of organising society, which creates a pandemic wealth inequality.

Ireland has transitioned from an island that provides cattle to Britain and a reserve pool of workers, to one of the largest tax havens and places for shadow banking in the world. Simultaneously, financial services which manage all this capital have also developed, squeezing out significant sections of the working class from Dublin City Center and all the way to the Wicklow mountains.

The infant Irish free-state engaged in some early investment, setting up industries to harvest peat or manufacture pharmaceutical pieces, but where are these companies now?

The economic model of Ireland has to be reshaped and built from the ground up. An indigenous industrial sector, based on green industry needs to be developed. Inward investment to facilitate must occur. All resources must be at the disposal of an economy that is democratically managed and socialised for the benefit of the working class.

Political sovereignty and liberation is inseparable from economic independence. We must strive to smash the grip multinationals have over Ireland and chart our own destiny. In order to accomplish such a task, we have to chart a course far more radical than winning a few seats in parliaments. We have to build power among the young proletariat.

How do we understand ‘power’?

It is important for the Communist and working class movement to have political expression and articulation. The question that should be raised is what exactly is being demanded? This election expressed a desire for better public services, yet there lacks a mass extraparliamentary movement that can ensure our demands are met.

We understand progress to be the shifting of influence and domination from the ruling classes of employers and landlords to workers and tenants. The actions to be taken must involve a process of organising young workers, students and tenants into organisations that can fight for demands made at polling stations. By alleviating the worst excesses of rampant employer-employee abuse and parasitic landlordism, Communists can demonstrate the power of organising that goes above and beyond the parliamentary method. The stronger our movement is, the more prepared we are to defend against austerity and to mobilise. That, in short – is real democratic power.

It is our strategy, programme and task to build that extraparliamentary movement that can one day overthrow the failed statelets north and south and seize power on behalf of the working class. We fight to construct a Socialist society where Ireland’s needs will be met by the communal and social ownership of all the wealth we produce. It is our struggle, to see the parasitic social relations in capitalism of exploiter and exploited fully abolished and replaced with fraternal relations of human kind.

This election is over, but the fight for an all Ireland 32 County Socialist Republic continues.