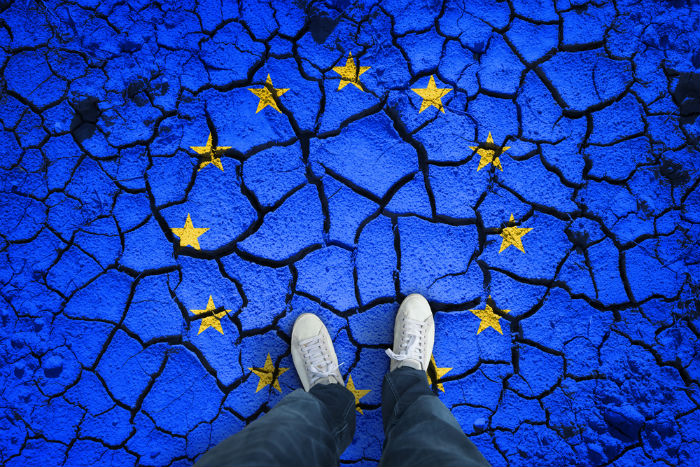 The primary role of the European Union has been to limit the power of its members to act outside the bounds of its strict economic and political model. This capitalist-imperialist union came about in order to combat the rising tide of socialism, while ensuring maximum profits for European monopoly capitalists at the cost of further destitution for the southern hemisphere and the countries in its peripheral orbit, such as Ireland, Greece, Bulgaria and Portugal. With each passing year, the EU courts enforce further resolutions allowing the claws of capital to dig deeper into our society. Resources, services and infrastructure under state control are increasingly under pressure from the EU’s cardinal doctrine, the bogeyman that keeps the German and Belgian bureaucrats getting up in the morning: interference with free competition. Basic functions of a state, such as public investment, have been restricted to an unprecedented degree. Dealing with the housing crisis, the healthcare crisis, the climate crisis is rendered impossible – ‘not sensible’ or ‘unfeasible’, to use their language. Forcing Ireland to take on 42% of the EU’s banking debts following the 2008 crash assured European imperialists that the Irish state would have to operate along the lines they dictate and that the Irish working class would be subject to a skyrocketing cost of living.

Over one hundred and fifty years ago, Karl Marx saw that national debt is the means by which the modern state is sold to the capitalist class, determining which section of that class will be in control. With even more striking relevance to the people of Ireland today he went on to write, ‘The only part of the so-called national wealth that actually enters into the collective possessions of modern peoples is their national debt.’ The European imperialists, encouraged by the Irish bourgeoisie, steal our national sovereignty by means of treaties and debt-trapping, replacing it with the politics of the neoliberal consensus.

The prayers of the EU bureaucrats to the gods of the free market have been answered and, as Lenin wrote, ‘monopoly… grows out of the soil of free competition’. Granting capitalists freedom to compete over land and resources always leads to the concentration of wealth in the hands of a few profiteers. The most concerning consequence of this destructive model is Europe’s institutionalised inability to tackle the intensifying ecological crisis.

The consensus of the scientific community is that stopping, or even mitigating, ecological breakdown will take nothing short of revolutionising the global economy. Since becoming a mainstream political issue, the Irish state has only demonstrated its utter impotence in the face of this global threat. The country has barely dented its targets for carbon emission reduction. Hemmed in by enormous debt and the politics of austerity, the urgent need for investment in reforestation and renewable technologies has been alluded to by the state but hardly tackled.

Transforming our agricultural base from big beef farming to sustainable, ecological agriculture should be prime among the tasks of any government that has the interests of the people and the planet in mind. Yet in Ireland (and throughout the capitalist world) vast mono-culture is the dominant character of agricultural production. The competitive production inherent to capitalism encourages the maximisation of short-term profits through cultivation of a single crop, generally just one strain of a particular crop. In the long-term the soil is exhausted and degraded, yet a country’s agriculture must operate upon these grounds to be eligible for EU membership.

‘To-day the competition of the trust-owned farms of the United States and the Argentine Republic is a more deadly enemy to the Irish agriculturist than the lingering remnants of landlordism’.
James Connolly

Without a transition toward socialism the small farmer will be ground under the wheel of capital and be forced to maintain ecologically-harmful farming practices in order to remain competitive. Daring not to break the capitalist laws of ‘free competition’ the Irish state will not subsidise and invest in new forms of agriculture which would allow farmers to make a living while ensuring the long-term sustainability of our land and our planet. Furthermore, the big farmers have enough political and economic power to ensure this necessary transition does not take place. Their refusal to change their method of production (a persistent problem with monopoly capitalists) has contributed to Ireland having the second lowest area of organically farmed land in the EU.

The continuation of human life on this earth beyond the next generation or two depends on breaking away from capitalism. Cuba has been named the world’s most sustainable country and this is in large part due to its revolutionary agriculture. Having seized the land from the capitalist farmers, they have moved toward self-sufficiency as well as a mutually beneficial and sustainable relationship with the earth. And all this under the crippling weight of an illegal US blockade. We have our role to play in saving the planet for future generations, and embarking on the path towards socialist agriculture would play a major role in reducing our carbon emissions and developing a give-and-take relationship with the earth, ensuring a healthy and lengthy life for the planet and all its creatures.

Connolly, Erin’s Hope: The End and the Means, https://www.marxists.org/archive/connolly/1897/erin/hope.htm

Lenin, The State and Revolution, https://www.marxists.org/archive/lenin/works/1917/staterev/

Morning Star, Cuba found to be the most sustainably developed country in the world new research finds, https://morningstaronline.co.uk/article/w/cuba-found-to-be-the-most-sustainably-developed-country-in-the-world-new-research-findshttps://morningstaronline.co.uk/article/w/cuba-found-to-be-the-most-sustainably-developed-country-in-the-world-new-research-finds