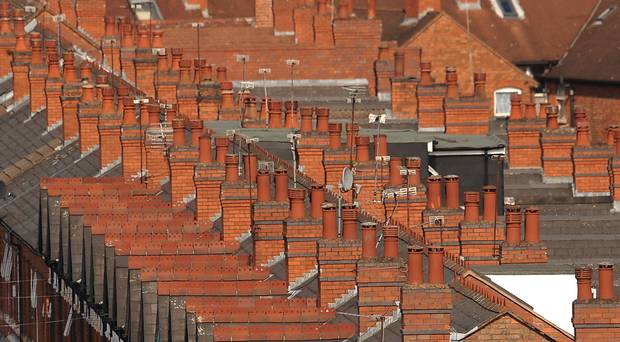 Housing has often been the arena in which class consciousness and militant action has been instilled in the hearts and minds of the Irish youth. This struggle is ever present in the North. Segregation of housing in urban centres of Derry and Belfast remains an obstacle to social cohesion and the unity of class action from both Nationalist and Unionist communities. Stormont, underpinned by the Good Friday Agreement (GFA) has largely excluded the working class from its benefits, with the 1998 agreement only serving to build limited cross-sectarian relations between careerist political entrepreneurs.

The Independent Housing Commission for Northern Ireland’s 2017 report underlines the hunger among the disenfranchised working class for mixed housing and the extent to which the polarisation of communities exacerbates the prominent levels of child poverty within Belfast. With over 90% of public housing segregated on religious grounds there is appetite for a mixed approach to assist the need for social integration with “80% saying they would prefer to live in a mixed religion neighbourhood.” It is no coincidence that Northern Ireland constituencies have some of the highest child poverty within the UK, with West Belfast having the second highest rate of child poverty in the UK behind Central Manchester.

There are still 109 peace walls across Northern Ireland, many in North Belfast which experienced some of the worst violence of the conflict. The Northern Ireland Assembly pledged to remove all walls by 2023, this is a highly ambitious yet progressive step in easing sectarian tensions with cross-divide support. Steps have been taken in fulfilling this objective with progress being made when the Springfield Avenue barrier was taken down in September last year. This proves that with a willing working people, change is possible. A recent report found that “62% of the Protestant/Unionist community and 73% of the Catholic/Nationalist community do say they wish to see the barriers removed within the next generation.” These radical changes in the architectural makeup of the city are facilitated by a changing demographic in the North. This includes the youngest average population in the UK, with more open attitudes than previous generations.

The ever-growing secular population in the North will go some way in decreasing tension between flashpoint areas. The Peace Walls, the front line to the sectarian conflict, will serve as our front line in the struggle for class unity. However, our actions must be conducted within the present material conditions and older generations remain permanently marked by the conflict. Peace Lines mustn’t be removed until communities feel safe in doing so. As the post-conflict generation now enter the world of work and the polling booths, the shift away from sectarian neoliberalism is ahead of us in the North. The Connolly Youth Movement must ensure that class politics storm through Belfast in the tradition of Connolly and Larkin.

Why do we have sectarian housing in the North? Sectarian housing is a blunt tool with which the powers of capital break us apart. This sectarian divide was inflamed in the minds of those living in Belfast throughout the non-nonsensical sectarian killings in the Troubles. Those in Nationalist and Unionist communities in ‘flashpoint’ areas often moved into ‘safe’ areas where the risk of attack by petrol bombs and stones from the other was significantly reduced. This was a result of some of the most horrific scenes witnessed in the 30 years of conflict that scarred the Province. On the 15th of August 1969 the RUC, followed by a crowd of Unionists opened fire on rioters and burned people from their homes in scenes of violence which left 6 people shot dead and 1,820 families forced to abandon their homes. Now in 2018, as armed campaigns are long over, we can develop a united working people in the tradition of great Irish socialists that went before us, to strike fear into the hearts of our oppressors.

In 1907 James Larkin, trade union activist and socialist, called a general strike of dockworkers during which the Royal Irish Constabulary refused to break up the strike action. The fearful Unionist aristocracy quickly retaliated by organising a regular British Army presence to quell any action. By 1919, a 40,000-strong engineering workers strike demanding a 44-hour week, a display of labour power resulting in a Belfast without trams, gas or electricity for 4 weeks. The greatest ever display of the iron fist of organised labour in Belfast resulted in the expulsion of 11,000 Catholics and 1,850 Protestant trade union activists. Sectarian measures were implemented, and Protestant workers began receiving benefits relative to Catholic workers such as access to jobs in manufacturing and better. Capital controlled organised labour by granting concessions to one side of the sectarian divide.

It seems unlikely that a united working class can be achieved without a proactive and sustained commitment by the Northern Ireland Housing Executive (NIHE). According to Savills, existing NIHE stock needs investment of £7bn over the next 30 years and nearly half its stock needs immediate attention. But there is still reluctance to change of status from the NIHE to enable it to borrow against its considerable assets to provide the adequate social homes and development of mixed housing projects badly required as a result of the neoliberal austerity agenda. This provides the Connolly Youth Movement with an opportunity to build a campaign for mixed, non-sectarian social housing in Belfast akin to the current ‘Campaign for Public Housing’ facilitated by our comrades in Dublin and Cork. Such a campaign would also call for a choice-based lettings system which, in effect encourages those currently living in or wishing to be accommodated in social housing to “bid” for properties outside of their immediate neighbourhoods

The political class of the North today aims to divide Unionist and Nationalist workers through housing to strengthen the hand of capital. A green or orange Belfast is a different shade of capitalism and it is a lot less terrifying to the faceless corporations on Lanyon Quay than a Red Belfast. Class solidarity will be built within the labour movement and expressed in campaigns to bring down the Peace Walls and build mixed social housing. RL.

“Such a unity is infinitely precious, and infinitely important to the working class. Disunited, the workers are nothing. United, they are everything.”- V.I Lenin