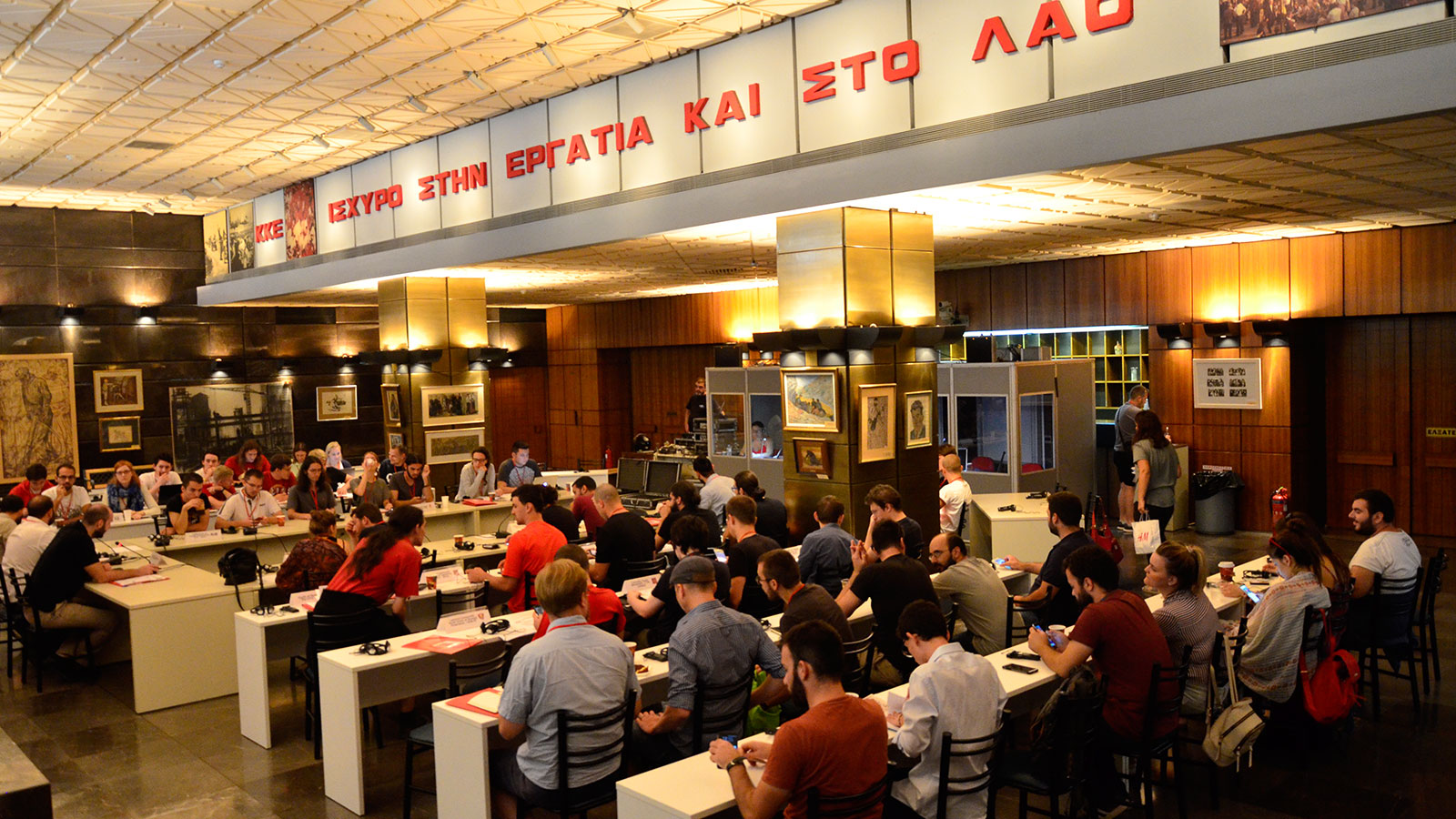 Youth of Europe rise up

Join us in the struggle for our contemporary needs in education, work and in life!

During the Meeting we, the Communist Youth Organisations, highlighted the enormous problems that the youth face and we informed each other on the more significant developments in each of our countries. We discussed the struggles of the youth, the essential conclusions we have drawn and we exchanged opinions on these. We acknowledge that the Communist Youth Organisations in Europe have in recent years made notable efforts to defend the rights of the youth and have waged important struggles against the capitalist system in today’s conditions. At the same time we have contributed to reinforcing and strengthening the Communist and Workers’ Parties in our countries, whilst we accumulate rich experience that can help us so that our future struggles will be more effective.

The 14th MECYO was convened by the Communist Youth of Greece (KNE) in the context of the 50th anniversary of their foundation along with the 100th anniversary of the foundation of the Communist Party of Greece (KKE). We appreciate KNE for hosting the Meeting which, since 2001, has been held in Madrid, Lisbon, Athens, Istanbul, Prague, Barcelona, Brussels, Frankfurt and Rome. This year’s Meeting saw the largest participation of Communist Youth Organisations so far, with more organisations taking part than ever before.

Capitalism, NATO-EU and the bourgeois governments destroy our lives and our future!

Nowadays, the youth of the working class and the popular strata face the brutal consequences of anti-people policies imposed all over Europe. This has resulted in a current and future of deterioration of living conditions and of rights. We will live under worse conditions than those that our parents faced. All around us we can see huge production of commodities and wealth, technological advances and developments in science and research. At the same time we observe that all of this is not destined for the satisfaction of our needs, but on the contrary it is destined to increase of the wealth of the monopolies. The gap between the few rich and the many poor is rapidly growing.

The above facts are merely some of the consequences that the anti-people policies implemented all over Europe have brought to our lives, both in the context of the economic crisis of capitalism as well as nowadays in conditions of unstable, slow and anemic recovery and growth. These are the consequences of the cohesive anti-people policies that have the mark of capitalism, imperialist associations, such as NATO and the EU, bourgeois political parties and their youth organizations. These policies have the support of both the typical liberal and social-democratic parties that play a leading role in bourgeois governments, as well as the so-called Eurosceptic forces (some of which are openly far-right) they are also offered support from the supposedly “left-wing” forces of the so-called Party of the European Left, which still attempt to convince the youth and the peoples using the false ideas of the “humanisation of capitalism”. In general the internal economic developments and the needs of each sector of the capital, but also and the competition between the bourgeois classes, is having an important influence in the political system because the ruling class is trying to organise the state according to new conditions each time.

Nowadays, there are a series of developments which prove that we are facing greater threats than ever before in our lifetimes.

Young men and women of Europe,

We encourage you to mobilise within your schools, universities, workplaces and neighbourhoods. Where the youth struggles for a life with rights, the Communist Youth Organizations will be present. We commit to offering our positions concerning the needs of the struggle, in order to sharpen its means and aims. We also encourage you to join our ranks for the struggle for the rights of the youth and socialism.

During the previous period, all our Organisations were at the forefront in hundreds of strikes, mobilisations and rallies that promoted demands of the youth and the workers’, especially in sectors where the youth are concentrated. We strived for organising and politicising these mobilisations with a class perspective. We waged several struggles demanding the right to dignified work and proper rights. We contributed to the development of school-student struggles, fighting for the school that school-students deserve today and fighting against the cuts to insufficient state budgets for education and against the commercialisation of education by the monopolies. We were in the forefront of the demands of the students in universities and Technological Education Institutions, so that they could be educated, and complete their studies without restrictions. We fought and continue to fight for free and public higher education, for the abolition of tuition fees – in any country that they may exist -, and for accommodation and board that is free of charge for students. We assumed initiatives for peace and against the imperialist war, we appealed to the youth of our countries for a struggle against NATO and the EU, fighting to exit from these associations and for the associations themselves to be brought down as well as the system that they protect. We fight to close down the military bases of the US, NATO and the EU that exist in many countries, including our own countries, and against nuclear arms and other weapons of mass destruction.

The militant action of our Organizations in each of our countries was the touchstone of the further development of convergent and common action of the Communist Youth Organizations at a European level. Our Organizations have promoted actions dedicated to the 70th anniversary of the Antifascist Victory of the Peoples in 2015, to the refugee and immigrants issue in 2016, and to the 100th anniversary of the Great October Socialist Revolution, in 2017, as well as the International Day of Solidarity with the Palestinian people in 2018. These were promoted through web pages and

our newspapers. Some of us organised International Ideological Seminars, received and sent delegations, signed common announcements and declarations of solidarity. Through a better and deeper cooperation we will reinforce the CYOs in the countries of Europe, as the precondition for new advances in all the continents.

The slogan “Proletarians of all countries unite” guides the action of each of our Organizations and we have great battles ahead of us:

Socialism is the only hopeful prospect for the youth

Young men and women of Europe rise up! Nothing is over yet!

Exploitation, unemployment, poverty, oppression, wars and forced emigration cannot and will not be our future! We have our whole lives ahead of us. The future lies within our hands. We can conquer it with our struggle! We can build a world of real freedom, based on the principles of social justice and peace. A world where all of us will enjoy the results of our work and where we will have contemporary rights in education, work, culture and sports. This world is not historically outdated capitalism. It is Socialism, a new world.

Because the future belongs to Socialism

We will be victorious!

The European Communist Youth Organisations that sign the announcement:

3. Young Socialists of the Socialist Workers Party of Croatia

6. Youth of the Communist Workers’ Party of Finland

13. Youth of Communist Party of Poland