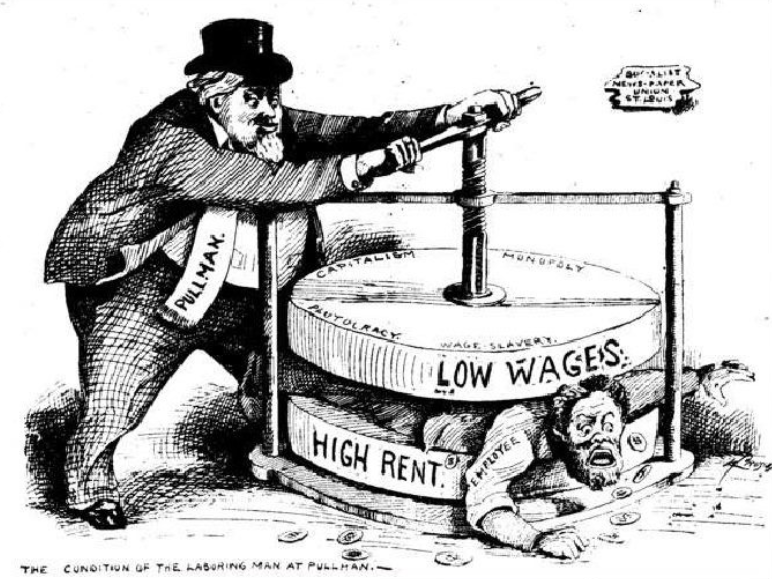 ‘But the putting of labour-power into action – i.e., the work – is the active expression of the labourer’s own life. And this life activity he sells to another person in order to secure the necessary means of life. His life-activity, therefore, is but a means of securing his own existence. He works that he may keep alive. He does not count the labour itself as a part of his life; it is rather a sacrifice of his life. It is a commodity that he has auctioned off to another. The product of his activity, therefore, is not the aim of his activity. What he produces for himself is not the silk that he weaves, not the gold that he draws up the mining shaft, not the palace that he builds. What he produces for himself is wages; and the silk, the gold, and the palace are resolved for him into a certain quantity of necessaries of life, perhaps into a cotton jacket, into copper coins, and into a basement dwelling. And the labourer who for 12 hours long, weaves, spins, bores, turns, builds, shovels, breaks stone, carries hods, and so on – is this 12 hours’ weaving, spinning, boring, turning, building, shovelling, stone-breaking, regarded by him as a manifestation of life, as life? Quite the contrary. Life for him begins where this activity ceases, at the table, at the tavern, in bed. The 12 hours’ work, on the other hand, has no meaning for him as weaving, spinning, boring, and so on, but only as earnings, which enable him to sit down at a table, to take his seat in the tavern, and to lie down in a bed. If the silk-worm’s object in spinning were to prolong its existence as caterpillar, it would be a perfect example of a wage-worker. ‘

To understand the nature of exploitation in capitalist society, we have to understand:

To build an understanding of these questions and answer them, we must first define our terms and our premise.

You work in Abtran. You sign a contract which stipulates that you will sell your time, i.e labour-power, for 9.65 an hour, 39 hours a week, Monday to Friday.  Your time has been purchased as a commodity by Abtran, just like the computers and other pieces of equipment there but you are there to produce further value for Abtran in the form of selling commodities. Your labour power is unique, if the employer-capitalist did not have it, the computers and others items in Abtran would not be able to produce more value, the worker selling their labour power is therefore unique.  More than often than not you will far exceed the amount that Abtran pays you on a daily, weekly or monthly basis in your workplace. You will rarely or ever see any increase in value of your labour power, i.e a wage increase. Abtran will run competitions to make workers compete but will reward only one person while benefiting from the over-all collective activity of the workers.

Question: What is the point of being a productive worker?

You work in a hotel. You have no set hours every week and are given a different roster every week. Your labour power to this hotel is worth 9.65 per hour and you can work between 10 – 48 hours per week. You receive no financial benefit from being a productive worker on a busy Saturday shift, or a lazy worker. You can do nothing and still get paid 9.65 or do everything and still be paid 9.65. You do not receive a share of the wealth that your hotel produces yet more tasks and productive objectives are put on you. Certain departments now also sell multiple services instead of the one they were initially designated to. You see no share of this productivity either.  What you sell to customers is already paid for as part of the initial commodity investment by the hotel (food, alcohol, rooms).

Question: How is the price of your labour-power determined?

You just lost your job and are looking again. You need to sell your labour-power to your 550e rent per month because if you do not, you will be homeless. You are a wage slave because the cost of living and the privatization of all services such as health, education, housing ensure that you need to pay for them all for wages. Wages are earned through the selling of your time i.e labour power for a certain amount which is usually a minimum wage.  Your value as a human being is estimated therefore at your capacity to produce and to work – if you cannot or do not work, you are not worth anything to the capitalist-employer because your labour-power cannot be exploited.