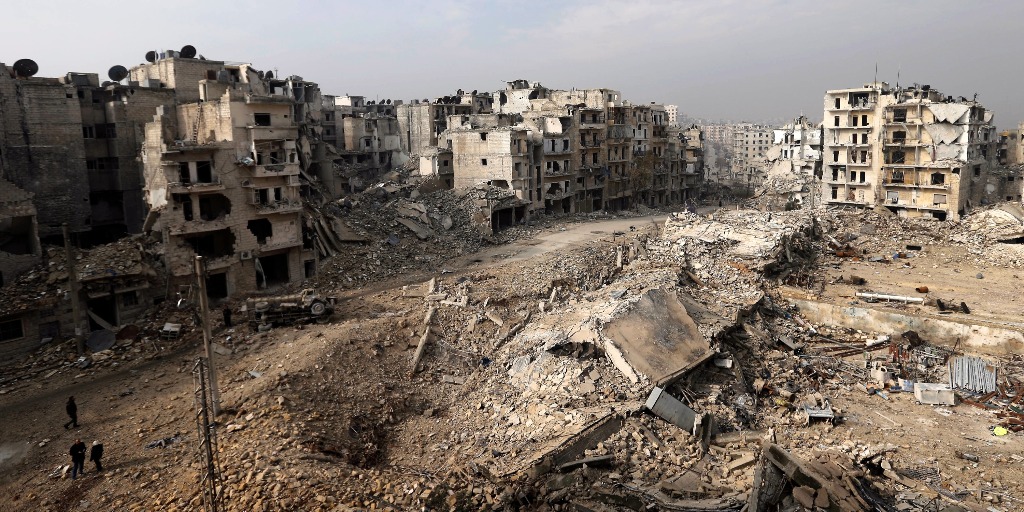 As tensions flare up between Moscow and Washington over the imperial intervention in Syria, we must first break down and analyse what has transpired so far regarding the Syria situation, we then must look at past occurrences of western intervention in the Middle East and begin to understand the underlying pattern of imperialism within these conflicts.

Historical context is required when talking of the conflict in Syria and the Middle East a whole. In 1916 the Sykes-Picot agreement was a secret convention signed between Great Britain and France with the approval of Imperial Russia, focused on carving up the Ottoman Empire after its demise. The agreement divided the Middle East into British and French administrated areas. This divide created most of the borders we see today in the modern Middle Eastern regions. The secret agreement was not shared nor published until after the overthrow of the Imperial regime in Russia, the Arabian population of the newly formed nations resented this treaty and resisted against the occupation and division of their land among arbitrary lines. The Sykes-Picot agreement was a massive factor in how the Modern Middle East came into being.

The end of World War two signalled the independence of many Arab countries, as the French and British mandate had ended in the newly formed Arab nations. The creation of the settler colonial state of Israel had a massive impact on Arabian independence. The support which Israel had received from the Western colonial powers allowed it to establish an expansionist policy at the cost of Arab lives. The policy of expansionism still continues today, as the Israeli government has its eyes set on the crushing of Palestinian land in Gaza and The West Bank. Israel continues to be a launching point for a neo-colonialist attack upon the Arab states and continues to commit human rights atrocities daily. Of course, the Western support of Israel’s violent expansionist policies has caused hostilities between the Arab nations and Western Powers.

Western attempts to undermine left-leaning progressive governments within the Middle East had been well underway since the 1950’s, the most notable of these attempts was the arming of the Jihadist fighters in Afghanistan to destabilize the legitimate Afghani government and to strike at the Soviet forces called in to help the Afghani state. The arming of militant Wahhabist groups to fight against progressive social governments by the US and its allies is a reoccurring trend throughout most of the modern history of the Middle East. From the Daesh to Al Qaeda, all of these groups have been unofficial actors of US imperialism due to their attempts to destabilize the legitimate governments of Arab nations.

The implementation of Wahhabist ideology within monarchies such as Saudi Arabia and Qatar was endorsed by the western powers as an action against the potential formation of sovereign progressive nations within the Middle East. These Arab Gulf states, along with Turkey, have been the main supporters of Daesh and groups such as the FSA, whose goal is the overthrow of the sovereign, secular, and democratic Syrian government. The marks of indirect and direct involvement of western influence are unmistakable in Syria, from the proxy funding of Daesh to the airstrikes on Syrian air bases in retaliation for accusations of “chemical weapon attacks” on Civilians, a claim which was falsely used against Iraq in 2003 for the overthrow of a sovereign government. Although I do not endorse the government of Saddam Hussein, it was a mere act of imperial greed, not charity, that the western coalition had invaded Iraq. This imperial greed, masked as a humanitarian intervention is the same claim they’re using against Syria. They accuse independent states of horrible atrocities and use these accusations to wage a war for imperial gain.

Now, of course, we must turn our attention to the events which have directly caused the conflict in Syria and begin to give an analysis of the current situation. The civil unrest in Syria which sparked the conflict was known as the “Arab Spring”. The Arab Spring was a series of uprisings and coup attempts against Middle Eastern governments which were indirectly supported by the western powers. These uprisings were championed by western media as “attempts to bring democracy to the Middle East” despite the fact that many of the groups, especially pertaining to Syria, were Salafist and Jihadist in their nature (Such as the FSA and Al-Nusra). These sporadic uprisings and attempts to stir dissent against the government eventually broke into a full-scale war. The “Syrian opposition” as these groups came to be dubbed, was backed by the US and their allies in an attempt to overthrow the Ba’athist government which was supported by many other Middle Eastern countries and Russia. The ongoing conflict is playing out very much like the Libyan conflict, in which a small group of loosely organized Jihadist insurgents, backed by the US government, overthrew a democratic Arab nation. The “Syrian opposition” has been known to ally itself with religious fundamentalist groups such as Daesh. Many of the “Syrian Oppositions” fighters willingly work alongside groups such as Daesh and many actually end up joining Daesh, with the FSA and many other groups being the gateway to this.

We must also touch upon the Qatar-Turkey pipeline. The Qatar-Turkey pipeline was a proposal to build a natural gas pipeline from the Iranian–Qatari South Pars/North Dome gas field towards Turkey, where it would meet up with the Nabucco pipeline and give cheap gas to European customers as well as Turkey. The only thing standing in the way of this exploitation of this gas field is Syria, as it would have had to go through Syria in order to get to Turkey, though the Ba’athist party have rejected the proposal for the pipeline. Qatari interest in the building of this pipeline would be just one of the reasons why they have involved themselves with the opposition forces of the Syrian conflict, as the fall of the Assad government would bring about the potential building of this pipeline.

Russia’s role in the conflict in Syria has been in the interest of countering US imperialism, and although Russia is in itself a capitalist nation, it is inherently less imperialist due to the constraint of its reach on financial capital. The United States is the biggest capitalist state with the most amount of capital, it is hegemonic and inherently imperialist as it lusts for more capital. The US looks to the untapped resources of faraway nations, seeking to sustain itself through the exploitation and raping of nations such as Syria and Afghanistan. As it has been previously stated, that although Russia is a capitalist nation, it is the US who has the greatest concentration of capital and wealth, and it is the US who lusts and hungers for more resources in order to fuel itself. In turn, we must critically support the Russian government for its role in supporting Syria.

Make no mistake, the western capitalist powers want war with Syria. The coalition of imperialists have tried covertly to overthrow the legitimate Syrian government by proxy, via the FSA and other Jihadist groups, and when this proved ineffective they take it upon themselves to actively wage war against the Syrian government and the Syrian people. The US and its allies don’t want “peace and democracy” in Syria, they lust for the cheap resources and labour that the country holds and will do anything in their power to destroy a beacon in the anti-imperialist movement. Russia’s role in the conflict has been a great help to Syria, and although Russia is a capitalist nation, we must begin to understand it’s narrative in opposing western imperialism. Russia’s allyship with Syria is one factor why the US and its allies have not launched a full-scale invasion as of yet. The alliance between the Kurds and the Government is strenuous, but as of now, they are fighting for the same cause, the sovereignty of a nation and freedom from Wahhabist ideology.

As the situation stands, the claws of the imperialist loom over the Middle East, and Syria is its next target. The working people of all nations do not gain anything from an imperialist war. The death and destruction that will be wrought by the US and its allies should they ever invade Syria would be brutal. Any right-minded individual will see the impacts in which war in Syria will cause and it is our duty to fight against imperialism wherever it arises. Hands off Syria! Hands off the Middle East! Victory to the Syrian people! — AH