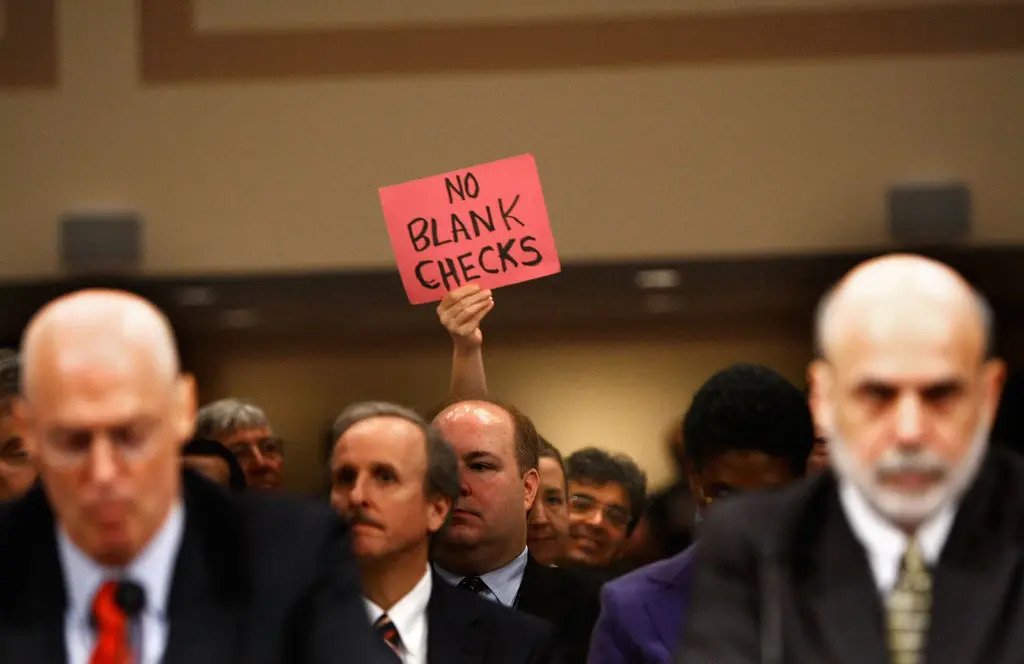 Thatcher’s empowered female successor, Theresa May, was quoted as saying there is “no magic money tree” when being asked about raising taxes or borrowing more to make sure the NHS could keep running. What the slogan generally means is that there are insufficient state funds for important already state funded institutions (like the healthcare system). However, crises such as COVID, the war in Ukraine, or the collapse of the financial sector demonstrate that in time of political expediency, there in fact is a magic money tree.

We can see an early example of the hypocrisy surrounding state funding in the bailouts of banks that followed the 2008 financial crash, which hit to the tune of €64 billion. What the bank bailouts and the subsequent failure to seriously prosecute any of the culprits demonstrated was that the state is more than able to marshal vast resources to the aid of different sectors/industries that are valuable to capitalism.

It came as no surprise to anybody that when COVID-19 began to spread and lockdowns were initiated, massive state funding would be needed to combat the worst effects that the pandemic would have on the majority of the population. For capitalism to continue functioning, it requires workers. Therefore the state, as an instrument of this interest, set about creating billions and trillions overnight in order to keep capitalism afloat. In a telling article, Time stated that the “disbursement of the money [referring 2.3 trillion Trump signed for distribution] so far has been riddled with complaints and analysis shows it has disproportionately gone to the wealthiest corporations and individuals”.

In Britain, the government unveiled a £400 billion COVID program; £400 billion that did not previously exist, or could be allocated to existing structural problems – suddenly available for COVID. However, very little of that made its way into the pockets of working class people. Instead, those that benefited were companies such as British Airways, Virgin Airlines, Tata and the Bank of England, who worked around the clock to buy up short-term debt from large companies to make them look financially stable.

In Ireland, it is estimated that the ‘cost’ for the State to handle the pandemic could be as high as €30 billion.  This money has been distributed in a variety of ways, but one practical example that you could argue is wasteful was the paying out of wage subsidies to workers who were working from home. The state essentially covered the payment of wages for multi-national tech companies. A study from Oxfam, titled ‘The Inequality Virus’ pointed out that billionaires internationally got wealthier, and that Irish billionaires added an astounding €3 billion to their purses.

Following the Russian invasion of Ukraine, and the ensuing refugee crisis, the Irish government became benevolent on the issue of refugees out of the blue. Despite running horrific direct provision centres for years now, at a huge cost to the state (and huge benefit to direct provision operators), the state decided that it would find €2.5 billion and completely change the rules around how people from Ukraine engaged with the Department of Justice.  The process has been made significantly simpler: they are entitled to social welfare supports, employent, and very basic housing. Contrast this to the struggle a refugee goes through if they’re from a non-white country, and we see a double standard that, while maybe not intentionally racist, certainly seems to have that effect. . Atop these different rules, Ireland has also offered to take up to 200,000 Ukrainian refugees. Direct Provision centres by comparison house only 7,000 nationwide, with asylum seekers in direct provision centres accounting for 3.5% of the total amount of Ukrainian refugees the state intends to take. Again, the goal may not have been racist, but the outcome most certainly has been. This double standard should be abolished, and all asylum seekers and refugees should receive dignified and supportive treatment, regardless of their origin.

There are examples all over the country of socially useful and necessary projects that require support but do not get it. When you compare this with the treatment that financial services receive, a contradiction becomes evident. In Fettercairn Tallaght, the local Horse Youth Project can’t get 40,000 in insurance money so it’s facing closure. In the HSE, student nurses, even those who went in to help during the pandemic, don’t get a wage.  In Jobstown-Killinarden, crack-cocaine outreach services lost their 190,000 in funding and had to close on the 31st of December, 2021.

The more general examples include the obvious pillar sectors of society such as  health, education, housing, and public infrastructure regularly being cut in order to ‘balance the budget’. Pay stagnation, reduced services and other issues dominate state services. We are told “there is no magic money tree” , but when the political will exists, there is in fact a magic money tree, and it contains almost unlimited funding for the financial sector.

Of course, a 32 county socialist workers republic would not be able to raise similar levels of huge funding. It is highly likely that we, as a revolutionary state, would be squeezed by international institutions not unlike the situation currently facing the Republic of Cuba. However, even a blockaded socialist country can still effectively direct limited state resources towards socially useful and productive sectors of society. Cuba, despite the blockade and several hundred years of asset stripping colonialism before that, still has less poverty than it’s “liberated” democratic neighbour Haiti.  Never be fooled by the lie that there isn’t enough money for essential services, the absence of funding to important services is borne out of complete apathy for normal people.  This clearly places the prospect of a dictatorship of the proletariat at the centre of the issue.  A society directed by the principles of socialism is the only form of society that can deliver for the people.

I have been thinking of writing this article since Dr. Stevie Nolan from Trademark delivered the political economy course to the Mandate Youth Committee. You can find out more about trademark http://trademarkbelfast.com/ here.