Orange is the New Black was a hit series that had millions of people raving about it for years. It follows the storyline of Piper Chapman, a middle-class irritating character who gets ratted on by her ex-lover for drug trafficking and lands a year and a half in the fictional correctional facility, Litchfield. Her character is presented as dislikeable for comparative reasons. The viewer is introduced to the wild differences between a significant portion of the prison and the Piper Chapmans of the world. Most of the other women around her are working class with much more emotionally daunting stories. Many of them have children, come from ghettoised working-class areas and have struggled since childhood. Some of them have been fostered, some of them had to mule or deal drugs and others were victims of sexual abuse. It was artistic taste to paint Piper Chapman in a certain way. She’s middle class, she runs her own soap making business and her parents are wealthy. Her class background informs all her later decisions, most prominently when she becomes a rat to the prison authorities and creates a white supremacist group to protect her petty bourgeoisie underwear selling business. Her behaviour is the behaviour of many middle-class people in general, they have only one goal, preservation of their position in society, even if it includes throwing her co-inmates under the bus. Even as she gets out of prison, we see her life contrasted to another inmate outside, Aleida, and the differences are immense. Aleida begins to have sex with the head guard to secure a place for her children and smuggle heroin into the prison to get away. Piper on the other hand, finds herself staying rent free in her brothers’ spare bedroom and working low wage jobs.

This headline doesn’t do justice to examining the other inmates but given the large pool of candidates for further inspection it’d take many pages to do so. So, it’s sufficient to say that the other inmates in the prison, almost without exception, are products of capitalist America. Their near universal poverty and necessity to commit petty crimes are linked there just like this link exists in Dublin. The poor are driven to survive, to rebel and to lash out at a system that does not care for them. When they do, they are ruthlessly punished without a care in the world for their circumstances or upbringing. This underpins the complete failure at what is projected as rehabilitative / restorative justice but functions as punitive justice. Indeed, many first-time offenders who do time tend to at high risk of re-offending and re-incarceration.

The American prison system is portrayed well in this series. While it is under government control, we see sadistic guards and corrupt administrators do whatever they please, essentially with zero consequences. We see how “keeping the budget” is the priority, rather than the successful rehabilitation of the prisoners. Indeed, statistically, the American system locks up more people per capita than any other country in the world. You might wonder what the purpose of that is, and there are many key moments that led to this massive growth in the prison population. The documentary “13th” is extremely informative on this subject and should be watched by any reader of this piece. I’ll simply summarise the growth in the prison population in this way: commodification of a prisoner i.e., privatisation of prisons into institutions that need to turn a profit.

Midway through the series, Litchfield is set to close due to the embezzlement of funds that its warden engages in. To “save” it, the new interim warden successfully organises for it to be privatised. In America, private prisons are paid by the federal government for every inmate they house. As such the first thing that MCC (the private company that takes over) does, is to double the number of inmates, cut down the quality of the food and the quality of the medication. This cruel re-organisation of the prison set off a chain of events, eventually culminating in a rebellious moment for the prisoners.

Another important element to the private prison industry is revealed in this series. Private prisons, in conjunction with other highly profitable mega corporations, use underpaid and cheap prison labour to manufacture items. In this case, the women are put to work on what they think is a better wage of $1 per hour, manufacturing underwear that sells for $40. This is perverse and only underlines the reason the industry exists in the first place; profit.

As Blanca is forced to stand on the table in the canteen, other prisoners join her, and eventually a confrontation develops between the deeply hated prison guards and the prisoners. It culminates in the murder of Poussey Washington and the sparking of a prison wide riot to acquire justice. The series clearly captures the injustice of her death, the lack of professionalism on the part of the guards and their coordinated attempt to cover the murder as an act of self-defence.

The prison system is portrayed accurately as a merciless monstrosity that does not help people who commit petty or non-fatal crimes. Indeed, what we see is how people who get in lighter sentences are pushed either by the guards or by the conditions of the prison to commit acts that only lengthen their sentence. From any reasonable perspective one would think this is completely unjust, but, if you are a mega corporation that thrives off having as many inmates as possible in your facilities, then this is a guaranteed way to make profit. Indeed, if you search “prison industry profit”, article after article comes up highlighting the multibillion-dollar industry that it is.

Again, the show does great justice to portraying the guards of this prison. They are rapists. They are sadists. They smuggle drugs, and they force the prisoners to sell for them. Alongside all that, they are extremely poorly trained and many of them have serious mental illnesses. When there are shortages in the newly privatised prison, the authorities go and . As the series unfolds, we are shown that many of them have very serious mental illnesses. In many ways, these veterans turned prison officers are also victims of the disgusting society that is America. They gave years of their lives to service in the American imperialist war machine, only to be dumped into unemployment and psychiatric issues without any help. Regardless of their personal and sometimes tragic stories, they don the uniform, and they commit the crimes that forego them their humanity.

Who makes up the American prison population?

It’s astounding that despite African Americans making up just over 10% of the total US population, they make up roughly 40% of the prison population. This is directly linked to mandatory minimum sentencing laws. Essentially, these are laws that give a mandatory sentence for a specific crime. For example, possession of marijuana became an offence that could carry a two-to-ten-year sentence and a fine of up to $20,000. That’s just one such law. According to the American Civil Liberties Union (ACLU), there are over 150 of such federal laws and they regularly land people caught up in complex situations into prison for offences that are non-violent or first-time offences. But the real question is, who are the people most likely to be caught for smoking or selling drugs? Well just like in any other country, that would be the poor, which, in America, is predominantly black and migrant communities. Of course, there is the white poor as well, but the structural anti-black and anti-migrant institutions of the US essentially guarantee disproportionate prison representation.

Although Orange is the New Black is gripping, for a while, it paints a grim picture using humorous sub-plots, stories, and characters of a prison system entirely unfit for purpose. As they all end up in maximum security, where punishment is dished out even more often and the guards are even more sadistic than their minimum-security counterparts. Many of those in maximum security will end up re-offending and being incarcerated for even longer, some might even get life sentences and never leave the prison. Anybody who views the series should take the funny sections of the series with a pinch of salt, because what it really shows is an unrelenting anti-working-class industry that thrives from the locking up, starving and punishing of millions of non-violent offenders in a vicious cycle of violence and re-incarceration. Potential solutions lie in viewing things like addiction and drug use as medical issues, abolishing mandatory minimum sentencing, re-designing prisons to be actually focused on rehabilitation and ultimately, removing the profit margins from the prison industry.

If you’re interested in reading about one of the biggest issues in the Irish justice system, then read our interview with someone who was convicted by the non-jury Special Criminal Court. 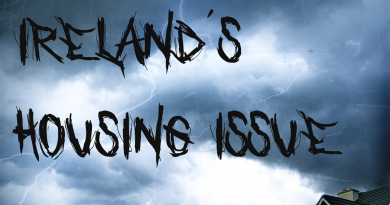 We Need To Talk About Housing | Forward #25

To Protect and Serve?