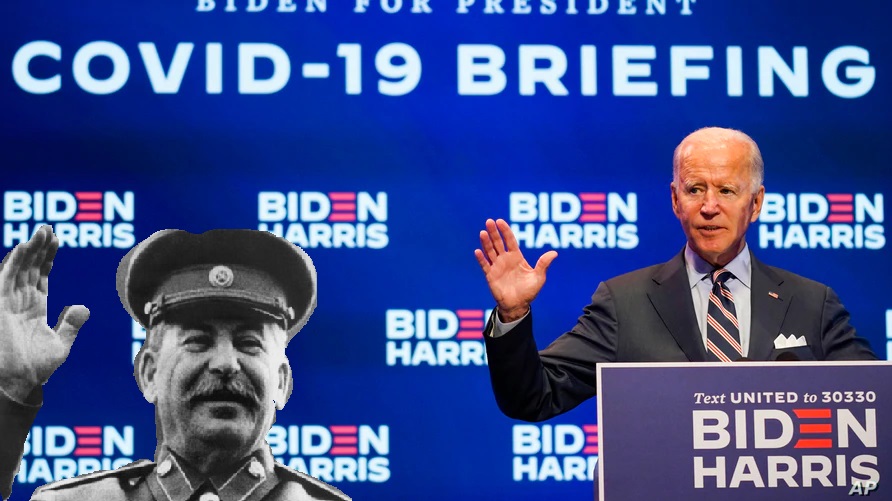 Contrary to widespread belief and misinformation from the far right, Joe Biden and the Democrat Party are neither left wing nor communists, in fact, they are politically and economically identical to their Republican counterpart. They simply wrap themselves in the flag of social justice and smile at you while they deprive you or drone strike villages in the Middle East.

Despite the victory of Joe Biden, America will remain the same. It is going to keep bombing countries and obliterating families with drone strikes. It is going to keep funding fascists and regime change against leaders it dislikes or governments that are any way left wing or want self-ownership of natural resources. It’s going to keep imprisoning ethnic minorities disproportionately and institutionally ghettoising communities.

Now America will do it all with the help of a smiling predator, instead of a Twitter-manic predator. The Irish Times and the Guardian will cheer him on. Joe Biden talks about unity and saving America, but he, like every president before him, is only really talking about saving the wealthy, elite and powerful.  Joe Biden is an archetype American politician, from one of the main dystopian “democratic” parties and fulfills every stereotype to that end. His record shows this, from his very beginning in politics, forming the “centre” of American politics by refusing to fully oppose segregation, to his implementation of a criminal justice system that amounts to mass unpaid servitude.

Liberals all over the Anglo-Americanised world will cheer on LGTBQ+ army drone operators murdering women and children in the Middle East. Newspapers owned by billionaires will peddle the story about how the middle classes will be rebuilt and the far right will continue to feed on the litany of contradictions encapsulated within liberalism.  They will triumphantly raise the narrative that we are “back to normal” and will present Biden as restorer of the world and the poor, when in reality, they mean that now cosmopolitan middle class lifestyles that journalists avail of are back in prestige. The reality is their business as usual was killing the world as well, no more quickly or slowly, just with a bit more subtlety and snobbishness than the approach of Trump. They will destroy our planet and reduce us to serfs, and tell us it’s a green new deal co-living arrangement and we should be grateful.

Joe Biden’s links to the ultra-wealthy in American society, his ‘standard’ political upbringing within the Democrat Party, his efforts to stabilise the American economic and political system and his establishment credentials are unquestionable. Unfortunately, his cheerleaders among the ultra-left and liberal spheres will attempt to repeat the idea that he’s “better than Trump”. This juvenile liberal argument will provide free ammunition to the far right which now seeks to re-organise and regroup outside the Republican Party.

The re-entrenchment of ‘establishment’ politics and the support that various self-appointed representatives of Socialism give it, will only further help secure the far right conspiracy theory that Socialists support the establishment.  This is akin to the support of imperialist countries that the 2nd International engaged in 1914 and onwards. What was done then, must be done now. Actual Communists must break with the supporters of capitalist and imperialist parties and build powerful, independent Communist organisations that almost certainly will never call for a ”lesser evil” vote for somebody like Joe Biden, Hillary Clinton or whoever.

It is essential right now for comrades all over to recognise that the history of the American working class and its experience is only unique by the facts of the American nation, but as far as universal principles of capitalism-imperialism go, it is the same. Social democratic parties will betray the working class in favour of attempting to mitigate its worst losses, and fascists will use this as a recruitment tool. It falls to us to be able to organise in our communities on economic issues of housing, environment and workplace issues and lead people away from conspiracy theories and far-right racist gabagool.

It falls to us, to neither be seen nor to be actively upholding establishment political figures such as Joe Biden, but to be actively providing a radical and revolutionary alternative to the millions of people who are completely disenfranchised with the economic and political system. Many of the conspiracy theories of the far right, despite being virulently far right and racist, also focus in on the injustice perpetrated by an unelected collection of very wealthy people.   The difference is, Communists don’t talk about PizzaGate, Illuminati or Lizard People, we simply accept that the ultra-wealthy are people just like us, they bleed just like us, and they can be stripped of their power, just like anybody can.

What that will take is coherent organisation, a scientific socialist analysis of how the modern capitalist-imperialist system functions and what it will take to overthrow it.

In Ireland, we are eagerly preparing to relaunch our movement into full activity and action come September. We are actively recruiting in all major urban centers and preparing for a tidal wave of political activity focusing on every subject. Our members are active in their local tenant unions and in their trade unions. Our members are anti-fascists and anti-racists. Our members attend solidarity protests for prisoners abroad and engage in solidarity events at home.  We know that our enemy, capitalism-imperialism cannot be mitigated by a “broad left government”. We know that when we march on the two failed statelets, we will not simply be marching on two big cities in Ireland, but the entire interests of the British and European Empires and the interest of the American Chamber of Commerce.

Comrades, don’t be fooled by ‘Sleepy Creepy Joe’ – get out and organise!