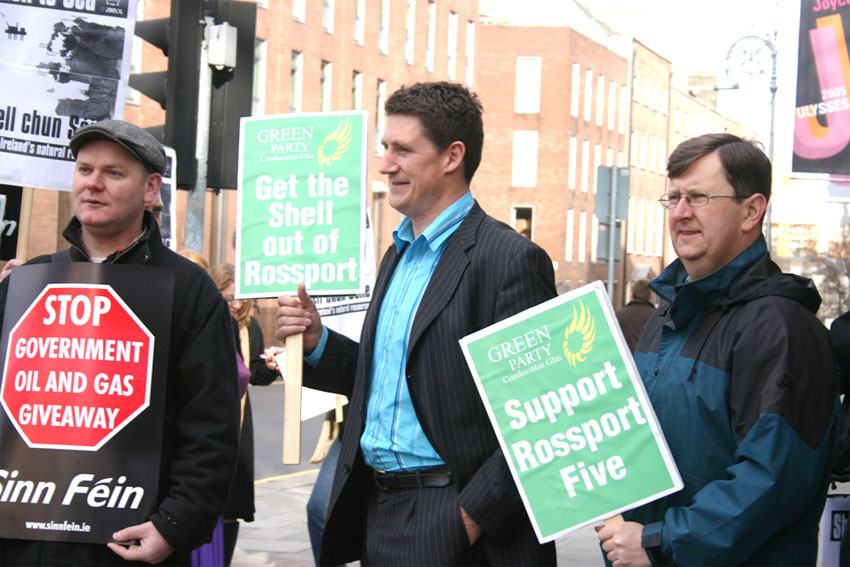 The Green Party withdrew because they felt “there was a lack of communication” and a “breakdown of trust” between their two parties. Naturally, their leader is quoted as being almost unrepentant about overseeing the introduction of ruthless austerity measures with words like “proud of achievements in the areas of planning, renewable energy, energy standards of building, water conservation and other environmental areas”.

According to an article that records how the Green Party went into government the last time, one of the largest contradictions of their tenure was to backtrack on their support for the Shell to Sea campaign – a campaign which was opposing the handover of natural resources to private companies. The Green Party had promised an independent commission as well as a review of the giveaway of oil and gas. One year later as minister, Eamonn Ryan was celebrating the great benefits that privatisation of natural resources would bring.

While the Green Party had Ministers, those Ministers partied like their Fianna Fáil counterparts. ‘Snouts in the Trough’ documents the lavish lifestyles those Fianna Fáil gangsters enjoyed, it also discusses the Greens. Bear in mind, the official statement following the 2008 Financial Crash was that the nation was in recession, so the following should be even more shocking. John Gormley, then leader of the Party “travelled to a climate change event in the Welsh border village of Hay-on-Wye. The average person – and certainly the average politician – would probably have taken the short flight to Bristol or to Cardiff Airport and made their way cross-country from there… Instead Mr Gormley got the ferry to Holyhead and was met by a chauffeur-driven car. It drove five hours from the Irish Embassy in London. The total cost? €2,200, or €440 per hour. The Sunday Tribune ran a headline titled ‘Green Gormley: Where’s my limo’?”

The chapter documents further opulent use of private chauffeur-driven car services by the former Minister. Alongside this, Mr Gormley stayed in the finest accommodation, naturally and one such bill in the Dorchester in London was €5,112. Recession? Not for ministers!

In fact, when Shane Phelan, the investigative correspondent for the ‘Irish Independent’, looked for details, almost 40% of them were missing out of a total of 66,000 euro worth of overseas travel. VIP Airport lounges, car hire, limousines, flights to exotic destinations and so on. Almost identical to the opulent and lavish lifestyles that Fianna Fáil and Fine Gael representatives lead.

These professional politicians are literally taking the piss out of the population and the Green Party is no different. Eamon Ryan for example, claims €750 a month for travel, on his bicycle, to the Dáil. One has to wonder how exactly you spend €9000 euro a year to cycle to work. Does Eamon Ryan purchase a new bicycle every month?

Chapter 11 of Snouts in the Trough covers Eamon Ryan’s lucrative travel and expenses. When he took a trip to the Korean Peninsula and Japan a small fortune of €55,000 was spent on him and five civil servants. Almost €9,000 per person. Remember, the country was in recession. The chapter correctly concludes that the Green Party had very much emulated the extremely comfortable approach to Ministerial expenses, despite the fact they had been presenting themselves as frugal and disciplined, and still do to this day.

Fast forward to 2020, when Eamon Ryan has been leaking internal information to apply pressure to his fellow party members to go into coalition, and we see a repeat of 2007. The Green Party is making demands, promising things, supporting campaigns. They have outspoken members on social media such as Saoirse McHugh and Cllr. Lorna Bogue who talk about the need for capitalism to be addressed as an issue linked with environmental safety. They are widely appealing to young people that are rightfully angry and pissed off about the lack of any action on climate change, however, with exactly how much good faith can we treat anything the Green Party (not individual members) does and says?

In terms of honesty and integrity, it’s a zero out of ten. Since assuming their council positions, for example, Green Party councillors have supported Fianna Fáil candidates in local areas – even Fine Gael called this arrangement out. In 2019, Green Party councillors voted to privatise O’Devaney Gardens social housing, in a controversial vote that was opposed by housing, tenant and workers organisations all over Dublin and voted on in the middle of a housing crisis.

Today, we have no government – but Fine Gael and Fianna Fáil are trying hard to court a smaller party to prop them up, offering all sorts of lucrative deals, ministerial positions, and rotating Taoiseach roles. They know that if they can copper fasten another Party into coalition, they can bring forth all the austerity they want and no Party can stand in their way.

As Eamon Ryan continues to pressure his colleagues into another coalition, various demands and plans are being set out. A political organisation like the Green Party is one that rejects a class analysis of society, rejects addressing capitalism in any substantial way and rejects any real change. In short, the Party is here to massage the free market into more eco-friendly bread crumbs, the same as it did propping up Bertie Ahern and his successor, Brian Cowen.

I would be inclined to disregard every single demand they have laid out to Fianna Fáil and Fine Gael and make the observation that whatever they are demanding will be invalidated by the need for austerity and the circus will begin all over again. Not only does this demonstrate the contradictory nature of Green Party members (anti-capitalist greens in a party completely committed to capitalism) but also the limits to parliamentary democracy. Fiscal compact treaties and dependence and subservience to the American Chamber of Commerce, the British State and the European Commission will never allow for any meaningful radical change.

The 17 point plan is shaped around the need for private capital. What we can expect from the Green Party is the use of state funds in a ‘public-private’ partnership approach which basically uses state funds and taxpayer revenue to line the pockets of ‘entrepreneurs’ who do the same thing the State could do, but for twice or three times the price. The interests of private profit accumulation have to be disregarded and fought, not placated.

Despite being filled with many optimistic young people who spread solid anti-capitalist messages, the Green Party is still institutionally bound to the ‘reform’ of the free market – as opposed to it’s complete overthrow. It is filled with many of the same members who would have been around in the previous coalition period, but more importantly, it’s consciousness and education is of ballot box centre-left politics.

The conclusion for the younger membership, who correctly identify capitalism as the key driving issue behind impending environmental catastrophe, is to not be disappointed when their TD’s assume Ministerial positions and do the absolute bare minimum for the environment, while claiming every benefit and hiding behind every excuse.

We urge young people of a revolutionary mentality to engage with Marxism, the Connolly Youth Movement and the Communist Party and to struggle for the complete overthrow of the system that is ruining the earth, not to try to mitigate it. Review our understanding of the ecological crisis and compare it to what your Party presents.

Either humanity as we know it will be wiped out, or we will save billions through revolution and the construction of Socialism. Make an active choice before the decision is made for you.