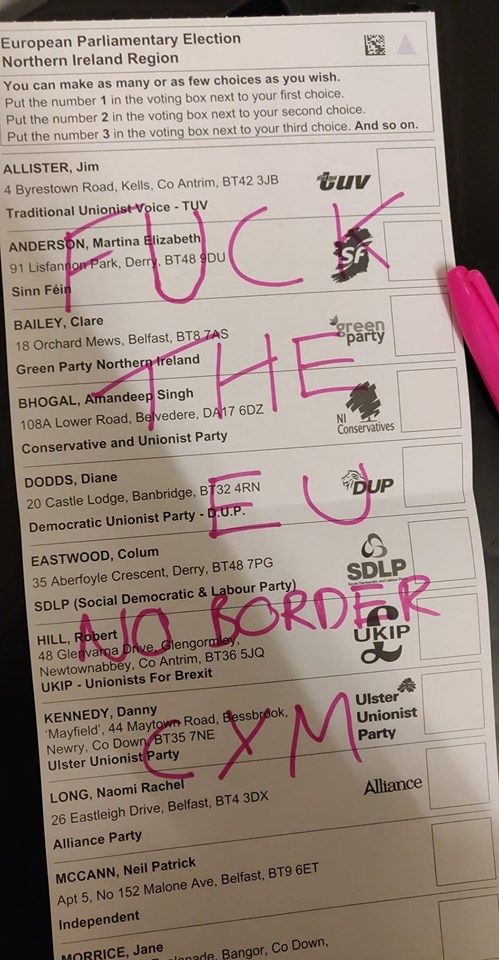 ‘Spoiling a ballot’ is the act of defacing one’s electoral ballot so as to invalidate it, meaning that the vote is not counted.

This proposes the question, why would someone spoil their ballot? Is it ever the correct action to take?

The north of Ireland’s European elections had a turnout of 45.41%, and in the south, 49.7%. this means both sides of the border less than half of those registered to vote didn’t vote (not even considering those not registered!). this could be for a number of reasons. According to Pew Research Centre, a study of those who didn’t vote in the American elections in 2016 found that the biggest reason for not voting was dislike of candidates and campaigns, and the second biggest reason was that they were simply not interested.

So, we then come to the question, why are voters disillusioned with electoral politics? Are they right to be?

As the Connolly quote goes, governments in capitalist societies are but committees of the rich to manage the affairs of the rich. Successive governments have implemented austerity, even parties which are self-proclaimed leftists, such as the labour party which campaigned on a manifesto of anti-austerity and an end to cuts, however in reality, the from 2014-2016 the labour party presided over the department of housing and a massive 90% increase in homelessness. Clearly not the heroes of the working class they pretend to be.

With ‘left wing’ parties pouring more and more resources and time into parliamentary politics at the expense of grass roots organising it’s no surprise that the amount of wealth held the working class is so low, with no signs of a stop in its decline. Imagine, for a moment if the resources, leaflets, time and money put into elections every few years was put into trade and tenants unions, building a worker’s movement which can pose a challenge to organised capital. Would we fair better in the fight against capitalism?

To return to the original question, what does a spoiled ballot do? Typically, spoiled ballots are an indication of political discontent, a type of ‘none of the above’ in the absence of such an option. A major consensus among the general population is that no one is worth voting for, so why bother? When not voting, the implication is laziness, that one didn’t care enough to leave the house, when the ballot is spoiled, the implication is that the voter did not approve of any candidates that stood for election, so why then, do those who do not approve of any candidates not make this heard, and spoil their vote? Had those who didn’t vote spoiled their ballots they would outnumber all parties who received votes put together! This would pose many issues for the democratic legitimacy of those parties which stood for election, when more than half of the population doesn’t support you, can you be considered to have a democratic mandate? The final question this would lead us on to would be; should I spoil my vote? One case where northern Connolly youth movement members spoiled their ballots was in the European elections of 2019, in which the choice was between pro EU, pro-Irish unity parties and Anti-EU Unionist parties, both these options were thought unthinkable, thus what option is left but to reject the question?

In elections, the best rule is vote left, as far left as you can, but sometimes, none of the above may be the best option.