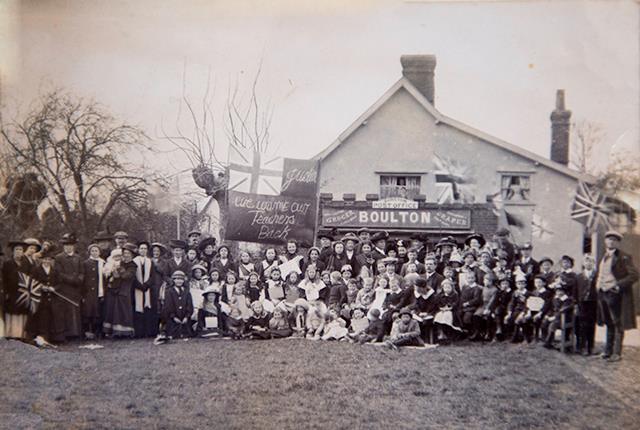 I was fortunate to have visited the Trade Union Congress headquarters in London recently, and upon request, I received a plethora of pamphlets on various events in British labour history. One stuck out when it was handed to me, the one named ‘The Burston School Strike’. What came into my mind instantly was the school protests that swept across Europe earlier this year. The story, though, was more radical, for this was the longest student strike, in history.

The story begins in the agrarian town of Burston in Norfolk in 1914. The working-class there was poor, living in dilapidated ‘tithe cottages’ which were owned by their employers who could throw them out if they were fired, something which seems to be making a comeback. In order to get food, they would rent ‘glebe land’ to grow vegetables. The children of these workers, tied to the material conditions of their parents, lived very squalid and deprived lives. Even though an Education Act of 1902 had been passed, children only received the learning that they needed for the life they would inherit. However, the school had hired Annie ‘Kitty’ Higdon and Tom Higdon, who were both Christians and socialists, as teachers – and they wouldn’t sit by while young people suffered.

Burston School was described as “ill-lighted, ill-drained, badly heated and wretchedly ventilated”. Kitty thought it would be unconscionable to not try and fix these problems. To fix the school she; burned coal in the fireplace to warm the room, gave food to the children, who often arrived hungry, and gave a higher degree of education by teaching the children how to play the organ, to type and speak French, among other things. Meanwhile, Tom organised for a local branch of the Agricultural Workers’ Union and this is where they came into contact with one Reverend Eland.

Reverend Eland was the chairman of the School Management Board and also owned plenty of glebe land himself therefore maintaining a high income for himself while most agricultural workers received but poverty wages. Tensions rose between the Higdon’s and Rev. Eland and this came to a head when Tom and agricultural workers became a majority in the parish council, deposing the Reverend and some of his parson cronies. In reaction to this, the Reverend made up a rumour that Kitty was abusive to two special-needs children. This was proven false but Tom and Kitty were still fired on the grounds that they were ‘discourteous’ to the staff.

The children and their families sided with the Higdon’s, however, and on the first of April, 66 of the 72 attending students they began what would be the longest strike ever for the reinstatement of their teachers. The school carried on for the striking children, for a ‘strike school’ was set up by Kitty in front of the school and teaching carried on as usual, with the National Union of Teachers funding her. The ruling-class and the church reacted quickly, fining those parents who didn’t send their children to the official school, and evicting people that helped the striking families out of their houses and off of their glebe land. Those who were fined had their amends repaid by collective charity on the part of the workers of Burston. It was this solidarity that curbed further fining by the School Management Board, although not much could be done for the people who had lost their jobs and cottages. By the third day of the strike, the story had reached national attention and money was sent in from around the country and by 1917 they raised over £1,250 (roughly £107,000 today) for the creation of and actual school, with support from across England and Scotland, from the Labour party and from famous people, Leo Tolstoy, for instance.

With the leaving of Rev. Eland in 1920 the tensions between the strikers died down and a friendly rivalry was born between the strike school and the official school. With the passing of the years, most students who attended Burston strike school were not even the original strikers but the sons and daughters of the them. When Tom died, on the 17th of August 1939, it became difficult for Kitty to run the school and because of that the remaining 11 students were transferred to the official Burston school, and therefore ending the strike.

It might be misunderstood that the strike was a failure, but by the time the strike had ended Burston school had changed significantly, for the better. The strike school building stands today and operates as museum that documents the story of the strike in detail, a story which is still remembered today by the British left. A rally is held annually on the first Sunday of September in the town of Burston itself by Labour and trade union members.

What are the important lessons we can learn from this strike? In my opinion there are many lessons. One is the reactionary and malicious nature the Church, another is that capitalistic corruption can rear its head in every level of society, even in your own parish, others may be that of the enormity of the control of the bourgeoisie, controlling where we live, what we consume, and how we work. To me the most important lesson is that when workers unite in class consciousness, we can fight and win.

1 thought on “The Student Strike That Changed British Education Forever”