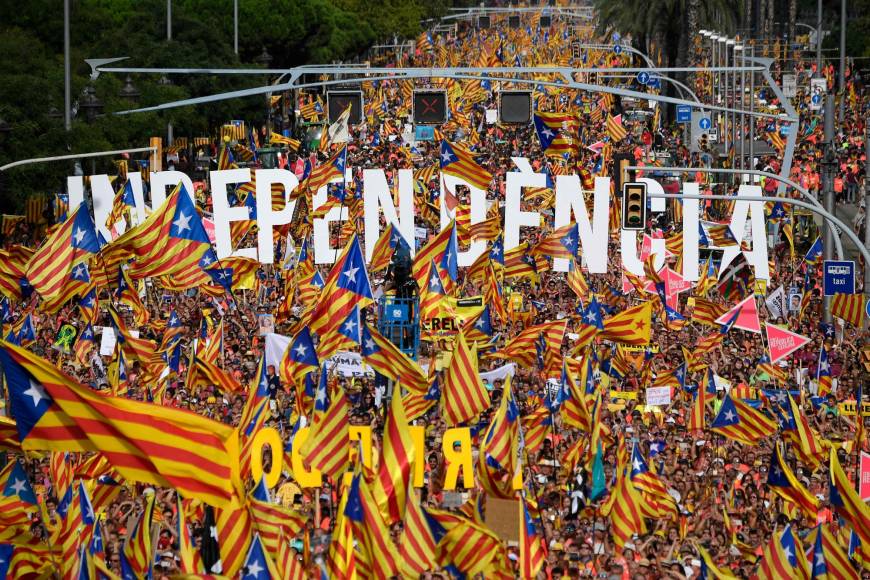 To answer this we must start by analyzing the formation and historical development suffered by the Spanish nation from its origins:
In the case of Spain, the political nation has a serious problem; It was, from the beginning, and we talked about the times of the Spanish Empire, a malformed superstructure.
To summarize, several factors of this malformation are the displacement of the economic core to the periphery (decentralization), problems within the Spanish historical development of the passage of traditionalism to more progressive governments and not least the fact that Spain has never had a liberalism centralist according to the historical situation itself, instead, the Spanish model was an import of other models such as the French or American and were pasted into Spain ignoring the material conditions themselves.
To the affliction of the contemporary apologists of Spanish nationalism, the empire was not all glory, development and learning, but the misfortune of the Spanish nation, and the process of its construction.
The absolutism and the imperial adventure are related to the defeat of the revolt of the communities of Castile. Beyond the disputed character of class of this rebellion, the certain thing is that the affirmation of the real authority in which it was going to be the nucleus of the empire was realized on the defeat of a movement based on the cities; that is to say, about the socio-political ecosystem in which the bourgeois wing of the Third Estate is incubating par excellence.
From then on, the foreign adventures and the weight of the empire crushed the Castilian social fabric (exactions, recruitment, exorbitant and harmful impact on the Castilian economy of the metals stolen in America, etc.). This process, while constructing a heavy bureaucratic framework in Castile, pushed social and economic vitality to the periphery of the imperial core. The weakness of any bourgeois boom in the eighteenth century is reflected both in the Bourbon attempts to reform the monarchy and in the substantial weakness of the Spanish Enlightenment.
As for the first, from the New Plant to the reformism of Carlos III, more than an administrative rationalization was extended, via militarization, the executive power of the crown, but without touching an apex the aristocratic character of the political structure. In this way, far from contributing to the development of a unifying impulse related to the rise of bourgeois civil society, feudal heterogeneity remained the key to the political vault of the State in the Castilian-Andalusian nucleus.
Thus the local life developed from itself, alien to a State “whose authority ceased at the municipal level”.
As for the second, the weakness of the Spanish enlightenment, it is something enormously important, because it not only points out the weakness of the bourgeoisie at the moment in which the historical tasks of its revolution are put on the agenda, but also it has necessarily been projected beyond this social class, inevitably determining what is scary and dependent on any theory of progress in these lands. This has established what has been the main historical weakness of the revolution in Spain; to be incapable in general of generating a revolutionary vanguard at the height of what the circumstances demanded.
The bourgeois development, on the other hand, was limited basically to the commercial ports of the south, but in its narrowest and most primitive form, as commercial capital and under the corporate cover of a colonial monopoly that reaches 1778. In Catalonia, on the other hand , the signs of an economic renaissance are seen in this century that are laying the foundations of its future industrial power “

2-Catalonia as a historically formed community of economic, social and political life:

Catalonia is a community of historically formadal economic life; the Empire devastated the Castilian bourgeoisie, and displaced the growth of industry to Catalonia and the Basque country, giving rise in both regions to an economic life very different from that of Castile.
– In 1230 Fernando III of Castile unifies under his reign the ancient kingdoms of Asturias, León, Galicia and Castilla. The different states under the crown of Castile retained their character of kingdom and certain legal peculiarities, however, did not enjoy autonomy or fueros similar to those of the crown of Aragon. In spite of the dynastic union between the kingdom of Aragon and the principality of Catalonia they continue being independent states in uses, customs and even in the currency.
After the outbreak of the Corpus de Sangre, Pau Claris on January 16, 1641, proclaimed Catalonia an independent republic, but the Catalan oligarchy lost control of the incipient republic before the revolt of the peasants and impoverished workers of the cities. The Catalan oligarchy before the nascent social revolution, declares itself vasalla of the king of France, that next to the military intervention of the king of France and the appearance of the plague causes the defeat of the Catalan Republic and its later partition.
– After the proclamation of the 1st Spanish Republic, on February 11, 1873, on March 5 of that same year a group of politicians, led by José García Viñas, proclaimed in the town hall of Barcelona the “Catalan state federated with the Spanish republic”. The provisional president appointed by the four Catalan councils to form a provisional government that would call elections to the Catalan Cortes was Baldomer Lostau, one of the heads of the Federal Democratic Republican Party, with the support of the mayor of Barcelona, ​​the also federalist Miquel González i Sugranyes. After the president of the First Spanish Republic, Estanislao Figueras and the leader of the federal party Francisco Pi y Margall, promised the dissolution of the Spanish army in Catalonia, the proclamation was dismissed on March 7, 1873.
– The III International recognizes the Unificat Socialist Party of Catalonia as its official section in Catalonia during the summer of 1936. This recognition breaks the organizational principle of the Comintern, based on the fact that each State had the representation of a single communist party, so that the Communist International recognizes the plurinationality of the Spanish state, and in fact the sovereignty of Catalonia.

3-Analysis of the Nation”

The nation is not simply a historical category, but a historical category of a certain epoch, of the age of ascensional capitalism. The process of liquidation of feudalism and the development of capitalism is, at the same time, the process in which men constitute themselves as nations. This is the case, for example, in Western Europe. The English, the French, the Germans, the Italians, etc were constituted in nations under the triumphal march of victorious capitalism over feudal fractionation.
But there, the formation of nations meant, at the same time, their transformation into independent national states. The English, French, etc. nations they are, at the same time, the English States, etc.
But, for example, there were cases, especially in Eastern Europe, where multinational states were created instead of political nations, such is the case of Austria-Hungary and Russia. In Austria, the most developed in the political sense turned out to be the Germans, and they assumed the task of unifying the Austrian nationalities into a State. In Hungary, the most suitable for the state organization turned out to be the Magyars and they were the unifiers of Hungary. In the Russian example, the formation was being formed by a front where there was a powerful and organized aristocratic military bureaucracy formed in the course of history.
This peculiar mode of State formation could only take place under the conditions of a feudalism still unliquidated, under the conditions of a weakly developed capitalism, in which the nationalities relegated to the background had not yet managed to consolidate themselves economically as integral nations and such was the case. the case of Spain.

4-Brief notes on the communist program:

The communist program, speaking of the Spanish situation, does not seek to unify Spain; seeks to abolish class society. It is not about being Spanish and much Spanish, but about ceasing to be workers and ceasing to be Spaniards in order to be Emancipated Humanity.
We communists should not consider ourselves heirs of the Jacobins because the Jacobins were liberal revolutionaries; we are communist revolutionaries. We do not want to centralize or consolidate any Nation-State (like the Jacobins), we want to destroy the Nation-State to build the State-Commune (of which he already made a brief introduction to the Lenin Commune-States in “The State and the Revolution” ”, As well as the undoubtedly Leninist line of reconstitution, and that was later concretized the form, the system, the organization and the model of the States-Commune by Mao and the revolutionary experiences in the Chinese civil war and in the Great Salto Adelante, as in the Great Cultural Revolution.
Many communists use the crude concept of a “political nation”, when what Marxism is talking about is a “historical nation” where the following question can be asked:
Why Marx recognized the self-determination of Ireland, if it had no state?
In Ireland there was no liberal revolution to build a state, but there are more cases, such as the Finnish, the Polish, the oppressed by Tsarism that won their state for the first time with the Bolsheviks …
In short, I recognize self-determination because I believe precisely that the proletarian movement must be internationalists, because it must be the masses who decide where the border of their state passes and because the unity of the communist movement passes over the nations.

Besides that at this time, we should support for Catalonia to sharpen the contradictions between the oligarchic Spanish bourgeoisie and the Catalan bourgeoisie, so that holes are created in the ruling class, apart from that it is a good way to make social contractions and economic ones become more acute, the dialectical and materialistic development of history will re-unite us, not under a state, but under the class organizations.