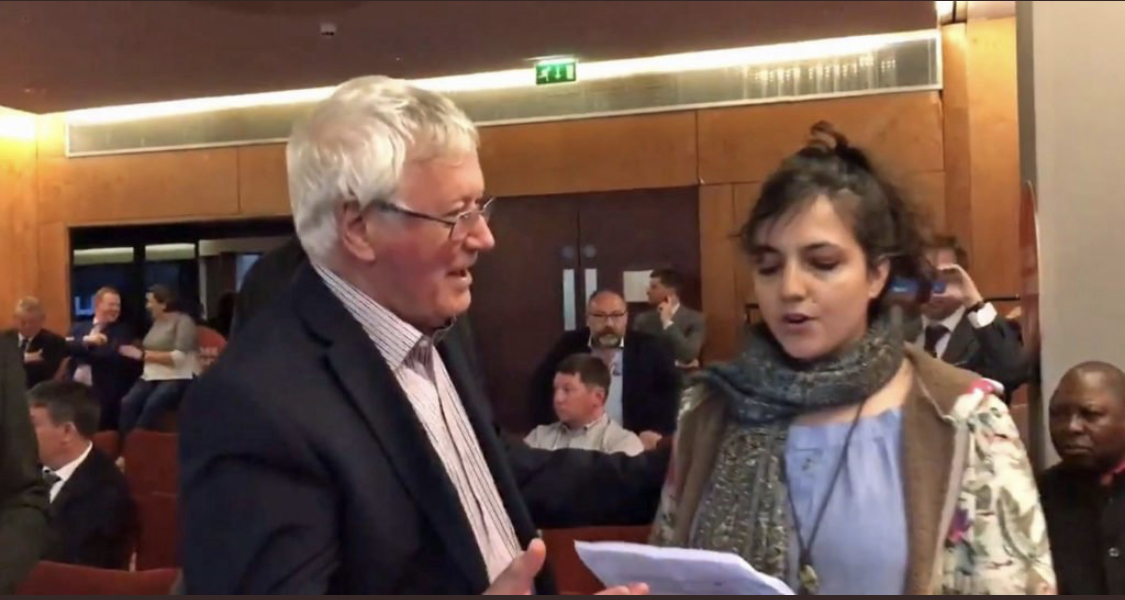 Forgive the interruption, but there is no way that we could allow for an event involving Leo and Simon to go ahead without highlighting pertinent, relevant and ongoing issues Ireland is facing.

We are requesting that this hall has a minute of silence for the two homeless men who died on the streets in Cork in the last few days.

Fine Gael, first backed by the Labour Party and then by Fianna Fail has introduced a ruthless programme of austerity, targeting the most vulnerable in Irish society.   Poverty, suicide, emigration, health service crisis, lack of adequate housing, poverty wages, defunding of public services in urban and rural areas, privatization of infrastructure and water, total ineptitude in approaching impending climate change and much more. In fact, the list goes on.

We feel it is our moral duty as young activists to stand up and highlight these facts over and over again because we believe that neither the ballot box, nor petitions nor any of the avenues provided to us work.  The institutions that this State have permit people to complain but making no binding arrangement or obligation on the part of the ruling parties to listen. They simply continue doing what they want because we ultimately have no way of properly holding them to account.

As a result, we are forced against our own volition to be here and place ourselves front and center in these meetings. None of us want to be here, but what option are we left with? What option do you leave people in Ireland when the gilded halls of the State remain closed to the ordinary person?

We can’t even recall our elected officials after all. We apologise for the disruption to those who came here to discuss but we feel that there can be no discussion involving representatives of the State and Fine Gael that does not speak of the chronic and anti-people policies that are constantly being rolled out.  In doing this:

We read these words for those who don’t have the opportunity to do so.

We read these words for those who have taken their own lives as a result of austerity.

We read these words for those who have died on the streets.

We read these words for those who cannot access basic health services.

We read these words for those who have migrated in the absence of opportunities.

It’s suitable that as we have this meeting here today, new data from yesterday informs us that there are now ‘officially’ 10,300 people living in emergency accomodation.. and we remember that Simon Coveney promised to have all of these people housed by July 2017. Then he got another job and forgot all about that. As he moved on, his successor, Eoghan Murphy is informing the country that the policies of the Government are ‘working’.

If we pursue this to its logical end we should be led to conclude that when the amount of homeless people increases every month, the policies created to help them are not working. Which either means that the ministers are lying to the entire population when they speak or that they are pursuing policies that benefit somebody else.

Who do the budgets and policies benefit?   It is clear to us that they do not benefit the majority of population in Ireland.

The reality, the actuality, the truth is that the policies that Fine Gael, Fianna Fail and the Labour Party have introduced in the last decade has led to thousands of deaths in Ireland.   Studies in the UK have made the connection between austerity and death. Austerity is death for the majority of the population. Austerity is wealth for a slim majority and that is how our country is run.

Our country is run to line the pockets of a small minority of people at the expense of the rest of the population and in this category, it is performing remarkably well. The rich get richer and everybody else loses out.

We have had enough.

We call upon all people opposed to the ruthless Blueshirt regime to question them at every opportunity you get and never, ever permit them to walk away from the disastrous, inhumane and barbaric policies they continue to introduce against society.

In the words of Connolly:

GOVERNMENT IN CAPITALIST SOCIETY ARE BUT COMMITTEES OF THE RICH TO MANAGE THE AFFAIRS OF THE RICH!