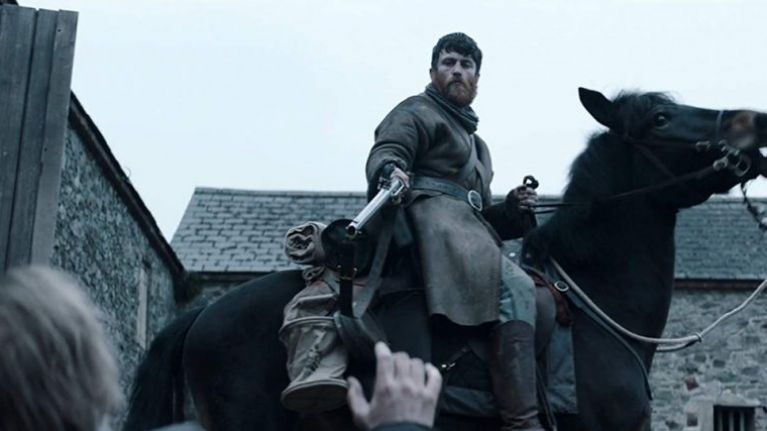 This review is the third article in Forward’s ongoing Critical & Cultural Analysis series, which

will analyse political themes in popular culture and use them to provoke critical discussion.

We are sad, it is true, but that, is because we have always been persecuted.

The gentry use the pen, we use the gun ; they are the lords of the land, we of

– An old brigand from Roccamandolfi

Black 47 is characterised by its wide shots, taking in the drab early winter scenery of the Irish countryside. This desolation, set in stark contrast with the usual depictions of Ireland as the Emerald Isle, is deliberate. We are made to look upon it first through the eyes of a disgruntled seasoned English officer, not quite sure of his place, and later through the eyes of an Irish deserter returning too late to protect his former life. His world has been turfed out by the landowners, leaving many homeless and vulnerable to the elements. In both cases, we are meant to look upon Ireland as an inhospitable place where one isn’t welcome. This feeling of displacement, as well as the early scene of forced eviction at gunpoint, are highly topical given the current housing crisis sown by speculative and irresponsible property development during the Celtic Tiger and the determination of successive governments to make housing the lucrative sole domain of landlords. The date of its release cannot help but colour the politically aware viewer’s perception as it follows highly publicised accounts of vulture funds protecting their interests by displacing people. From the Home Sweet Home campaign to the Leeside apartment mass eviction order to the Connolly Youth Movement members evicted from two vacant buildings by the armed Emergency Response Unit, the combined efforts of repression by the capitalist class have escalated continuously. In the most recent chapter of the crisis, the North Frederick Street occupation in Dublin was descended upon by private security agents donning balaclavas and driving a van with British plates. The Gardai and contractors hospitalised a number of protestors while preventing interference with this vicious raid.

The film touches not only upon the horrors of colonialism but on the deep feeling of betrayal people feel when collaborators are familiar face, elevating it from a purely historical account to a contemporary statement. While trailers cannot help but lie by omission, its suggestion that Black 47 would be the Irish Braveheart, while meant to entice international audiences, elicited strong resistance from reviewers. If Braveheart was an entertaining yet historically inaccurate revenge fantasy, Black 47 demonstrates more restraint and depth. In doing so, it also frustrates us as we watch the dispossessed protagonist Tommy go from wrongdoer to wrongdoer, meting justice left and right, without ever coming close to questioning the nature of the English administration and the complicity of many of his countrymen in it. His revenge is personal and local, which makes it ultimately unsatisfying. It would be all too easy for the cultural and economic commentary to be clouded by the recurring temptation to divorce the action from the historic context, but given the starving masses we are shown time and time again, to expect Tommy to right the wrongs of imperialism is to read the genre incorrectly. This is less a Victorian Taken and more a psychological thriller. While reviewers have spoken of it as a European western with Tommy serving the role of the brooding no-nonsense cowboy, he strikes me less as the man seeking the final frontier than the ronin who, no longer believing in the master he once had, becomes a self-destroying force of nature. The distant presence of the new American world is even alluded to by Tommy’s initial desire to emigrate, a call which he ultimately rejects.

There’s no mistake in the choice of the first scene: this film is not about Tommy, but about William, the Englishman compelled to stay in Ireland because he dares not admit that England has no need for him. Indeed, we hardly ever catch a glimpse of the real Tommy as he flickers unexpectedly in and out of violently knotty situations. As viewers, we don’t feel like we’re on the hunt with Tommy, anxious as to whether we will be stopped from getting our satisfaction. The story functions in a more provocative way. We join the English pursuers as they chase a lone guerilla whose laconic Gaelic quips (framed with subtitles) place him in a marginalised cultural category. By establishing this distance between us and him, we are not afforded the comfort of a recoverable untainted Irishness. After all, Tommy himself in the first couple of scenes is established as no longer “one of us”, having served in Afghanistan for the British army. Interestingly, this is also what fuels a certain sense of betrayal in William, who kills an uncooperative Irish prisoner in the first scene. Tommy was one of William’s best soldiers, and William’s colonialist mindset is so strong that this desertion amounts to nothing more and nothing less than a strike against his mentor. The British speak of him with a certain kind of awe reserved to the inhuman while also being bitterly remorseful to have trained him. The Irish improperly “changed” into British subjects are a constant theme. Tommy’s sister-in-law nonchalantly confesses that they all “took the soup” to survive. The perversity of a system that forces people into dependency while depriving them of basic necessities is glaring and resonant with the cultural logic of late capitalism. Just as modern capitalism shifts its domestic issues from place to place with the free flow of capital and labour, supplies are exported from Ireland to England while famine and the price of industrialisation are shifted from England to Ireland. In perhaps the arguably most satisfying scene of the film, Tommy instigates the lynching of the Quakers who took advantage of the wretched locals to conduct their work of spiritual colonisation.

The most iconic image of the film is the gombeen man whose head is replaced by that of a pig, visibly unsettling the previously stern English soldier. This is powerful because of its unambiguousness: the one who protects private property while sacrificing the lives of the many is no longer recognized as human. This image is doubly ironic considering that the gombeen manhouses pigs in the now roofless house of his deceased cousin. Unwilling to resist an unjust law, he is perfectly fine with taking advantage of any situation. If there is a tinge of western about Black 47, it is precisely this sensation of a no man’s land where the law ceases to function. Even while conceding as much, it’s important to point out that in distinction to the Wild West, the law ceases to function because of, not in spite of, policy. As we follow William and the English officer Pope, we notice a flip in their attitude to Tommy. First, there is frustration owing to their inability to control and contain what was their subject. Ultimately, it is the wealthy Anglo-Irish that make Tommy more comprehensible and less of an “other”. Pope smugly proclaims on their shared train ride, in Calvinist fashion, that starvation is an individual failing since the potato, as the crop with the highest yield for the lowest investment, is meant for those with no initiative and seeking easy gains. His intentional ignorance of the role of Anglo-Irish plantations and the lack of primogeniture in land distribution is paralleled by that of the proud Anglo-Irish landowner in his carriage in a later scene who boasts about increasing the lot he inherited from his father year after year. He sees himself as better suited to manage it than the natives, while the effect is acknowledged through the off-hand remark that the famine has boosted his profits as he has no need for the poor tenants that drive up his taxes. Profit growth for its own sake is exposed as a cancerous tendency, and the pursuing party comes to the uncertain realisation that they are the architects of the wasteland around them.

As we follow William and Pope around, increasingly disheartened by the complex emotions evoked by a suffering people, it’s those accompanying them that prove to be the most sympathetic characters. Hobson, the young private who serves them, cannot cope with his mission once he hears of the food shipments to England and Conneely, who serves as their paid translator, is an opportunist who abstains from voicing his true opinion for most of the ride. In many regards he consciously plays the role of the stage Irish character, combining foolishness with a crude wit to earn his way into the good graces of his social superiors. When he does speak against the landowners, it is to call into question their arrogant musings about the natural superiority of an English lady’s beauty. Conneely is quick to point out that no beauty exists in a vacuum and even the English lady would be less comely when subjected to starvation, poverty and overworking. Even more damning, landlord had scoffed that beauty, even in the landscape, is wasted on the poor as they only focus on their primal urges and so it needs, even demands, the eye of the educated and wealthy to be properly appreciated. This privileged idealism, framing the poor as insensitive and lacking artistic drives despite the wealth of emotion in their ballads and folklore, has permeated neoliberal rhetoric, expecting workers to be content with having their basic needs met while the rich who exploit them indulge themselves not only because they alone supposedly deserve it but because they are the only ones equipped to enjoy this beauty. For the wealthy, liberal educations in college serves not as a primary source of livelihood and professional satisfaction, but as a training to properly appreciate the objects and experiences enabled by their wealth, much like the grand tour of a previous era.

Black 47 has a political agenda, as there is no historical retelling without one. Films can only have the appearance of none because when it blends in seamlessly with the hegemonic ideology. It goes beyond calling into question Britain’s grip unto Ireland, an issue brought into the foreground with renewed urgency by the post-Brexit possibilities of escalation or reunification. What makes it a more remarkable film is that it sides unequivocally with the redefinition of beauty and lawfulness in a way that does not exclude the poor. Colonialism, after all, did not die a simple death but lingered on through the hierarchies it left in its place. If we are to talk of the Famine, moralising accounts about a God-sent plague are no more illuminating or honest than any other tales meant to conceal colonial guilt; the issue, after all, is systemic, and while Tommy’s was a lonesome journey, ours needs not be.