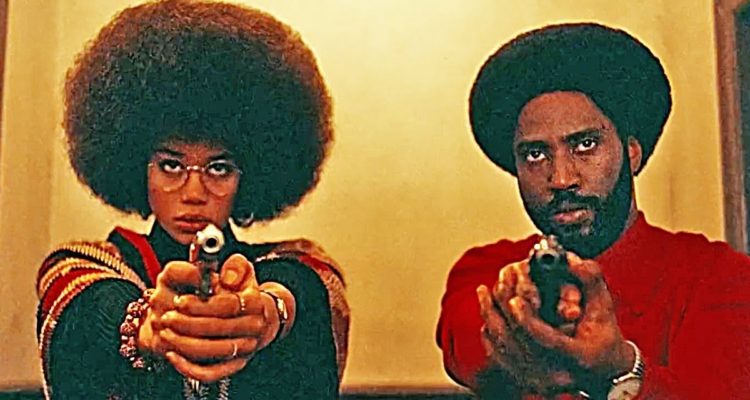 which will analyse political themes in popular culture and use them to provoke critical discussion.

BlacKkKlansman, a new movie produced by Spike Lee and released on the 24th of August has amassed over forty-two million dollars in the box office as of the 6th of September 2018. The film claims to be based on a true story, which to a degree is true, but has many fictional elements in it which will be discussed in detail in this review. Adding fictional elements to a true story is no crime in and of itself, but in this case clearly serves the purpose of propaganda. The story follows Ron Stallworth, a black man in the early 1970s who becomes the first black police officer in the Colorado Springs police department. In this workplace he unsurprisingly faces racial abuse. Ron then requests to go undercover and infiltrates a rally held by the black students’ union, during which Kwame Ture, a former black panther and civil rights advocate, was giving a speech. At the end of the rally Ron speaks briefly with Kwame, asking him if he truly believes in a race war. It should be noted that historically the black panthers and Kwame Ture did not. Kwame then responds saying “Arm yourself brother”, strongly inferring that he not only believes it should happen, but that it will happen.

The movie shows Ron go to only one black radical meeting, though in reality Ron infiltrated radical black groups for three years as a part of the American government’s COINTEL PRO (Counter intelligence programme) which was set up to discredit, damage, and arrest black radicals. COINTEL PRO documents which have been declassified have shown that whilst white supremacist groups such as the Ku Klux Klan and others were infiltrated, it was not to disrupt or to shut them down, it was to use them to threaten and intimidate black radical groups and to use them as tools of further repression. The police have been and continue to be the biggest threat to black people and minorities in general, with over 280 black people in the US being killed by police in 2017. [1] African-American adults are 5.9 times as likely to be incarcerated than whites and Hispanics are 3.1 times as likely. Black youth accounted for 15% of all U.S. children yet made up 35% of juvenile arrests in that year. [2] Entrenched poverty affects ethnic minorities, particularly black people in America, at disproportionate rates, and when the black and white arrest rates are adjusted to reflect underlying crime rates, they are still disproportionately targeted by police and the Judicial system. [3]

The next issue with the film is the scene in which Flip, the Jewish officer pretending to be Ron to infiltrate the KKK is threatened and asked to give a lie detector test to prove his whiteness. He stalls for time by getting angry and speaking of his hatred for Jewish people while the real Ron throws a brick through the house window allowing Flip to avoid taking the test. The group then chases Ron while firing a pistol in the direction of his car. The first problem is that this never happened. The second problem is that the officer wasn’t Jewish, he was, in reality, white. The purpose of making this officer Jewish, bringing in a lie detector and having a gun fired at Ron is to make it appear the police were progressives risking their lives to dismantle the KKK. The KKK is completely legal to this day, whilst the Mulford act was legislated to stop the Black Panthers in 1967.

Another problem is the bombing scene, where the wife of a Klansman carries a bomb in her purse to a black activist’s house, planning to leave it outside and set it off when the girl returned home. Ron, knowing about this in advance from his infiltration, then thwarts the bombing. The bomb kills KKK members who drove up to watch, including the husband of the bomber, this however, also did not happen. The most realistic part of this scene is when two white officers who drive up do not believe Ron is a police officer and refuse to let him get his badge out and begin to beat him. There was no bombing which was stopped by Ron or the police, this is simply an attempt to make the police again look like the heroes of anti-racism.

The final point to discuss is the scene in which Ron and a black students’ union member are sitting in a bar and a racist cop comes in drunk, stumbling, slurring his words and bragging about how he could do whatever he wanted to them without any problem from the criminal justice system. While in real life this could have been accurate, in the film multiple other cops reveal they were there to record his tirade and he is then arrested. Like all things mentioned thus far, this didn’t happen either. It was just another attempt to make the police look like they cared about racism by giving them a morally redeeming act, shifting the focus for racism away from its institutional nature onto individual ‘bad cops’.

The points I have spoken on thus far are similar to the criticisms of producer Boots Riley, producer of anti-capitalist movie “Sorry To Bother You”. The producer of  Black Klansman has made a response to Boots Riley, where he says “I’m never going to say all police are corrupt, that all police hate people of colour” his statement. Whilst on the surface this appears fair, it ignores the institutional role of racism in class society which is used to divide workers, and prevent them from organising together, which Angela Davis, a former black panther explains by saying “Racism, in the first place, is a weapon used by the wealthy to increase the profits they bring in by paying Black workers less for their work”.

The police have a long history of collaborating with white supremacists, take for example, The Greensboro Massacre, when the American Nazi Party and KKK assaulted a civil rights rally held by the Communist Workers Party, in which 5 civil rights protestors were killed, 11 others injured, and one Klansman injured. The police had prior awareness of the Klan’s intent on violence from an informant in the KKK, but the police stood by and allowed the attack to proceed unhindered, and the murderers from the Klan were acquitted by an all-white jury.

The conclusions drawn from this movie recognise the political context it was released in, which the movie to some degree links, as at the end it shows a sequence of white nationalist rallies held in the previous year in America such as the “Unite the Right” rally in which people were chanting “You will not replace us” and “White lives matter”. It also remembers Heather Heyer, the woman who was killed when a white nationalist drove his car through a gathering of anti-fascists.  The growth of far-right parties in America, such as the election of white nationalist candidates like holocaust denier Arthur Jones to congress in Illinois, continues unabated. The movie paints police as benevolent, altruistic moral men who want equality of the races, which frankly, especially in the time that the movie was set, was the opposite of the truth.