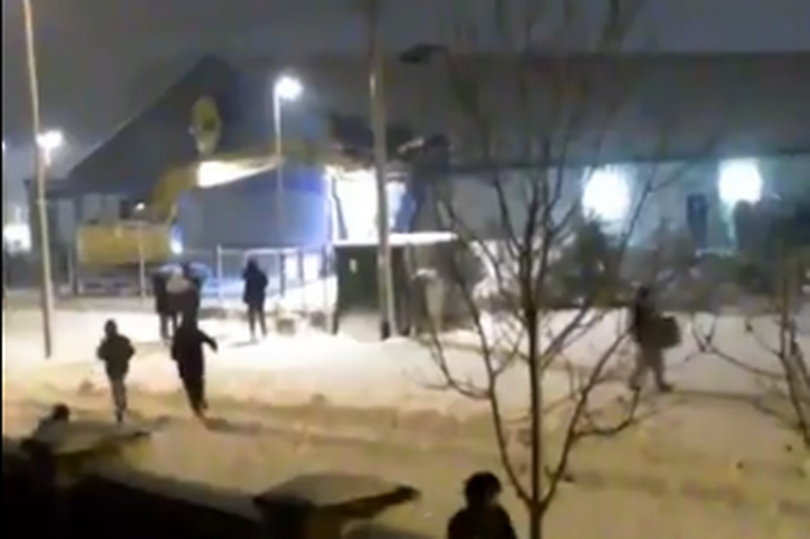 Recent events in Tallaght during the snow storm brought out the good, the bad and the ugly in social commentary but most notably it demonstrates how a distinct sense of economic morality predominates; demonizing one end of society while avoiding discussion of white collar crime by those with systemic protection. Commentators such as Frankie Gaffney, John Connors, Harry Bradley, etc have received tremendous amounts of criticism for highlighting the duality of morality in Ireland. Many people responding have immediately inferred from their views that they somehow condone the breaking down of the Lidl wall, or are anti-Lidl for whatever reason which in itself is merely a reflection of the inability to engage in discourse without resorting to bombastic and moralistic argument.

While none of these people, myself included, have suggested or condoned breaking in to Lidl or looting, what has been done has raised a very important point: a comparison as to what in the psyche of the working class constitutes crime and what one receives such harsh judgement for and on the opposite spectrum does not.

What happened was simple: those who saw an opportunity took it for personal benefit and enrichment. There was no altruistic or revolutionary motivation behind the actions in Tallaght and for that they deserve complete and utter condemnation – in a socialist society such behaviour would not be tolerated and the idea being put forward by blueshirts and their bootlickers that it would is nonsensical.

Yet a socialist society would not consider petty crime, which is what this act was, as the worst offence conceivable but rather the exploitation of the working class by the ruling class as the gravest of crimes. In Ireland that comes in the form of continued austerity, homelessness and an unrelenting onslaught against the working class yet the proportion of outrage offered to petty crime versus white collar crime is significantly imbalanced.

Why? In capitalist society, the cultural logic of capital recreates itself and permeates down through every layer of society and comes to the point where workers defend the political positions of the class that rules our everyday lives. For instance, let’s evaluate the incident in Tallaght. Many of the valiant Twitter defenders/other social media heroes have the angle that Lidl provides a community service, that in times of austerity it provided cheap prices on products and that it’s an employer. At face value all of these are true, but as Communists we are not taking things at face value and are tasked with rendering dialectical materialism to evaluate all events as part of consistent class struggle. Our goal is to uncover the class function that ideas facilitate.

Lidl and Aldi and other supermarkets literally compete with one another to monopolize the food industry, their sole motive has and always will be profit. Their low prices have nothing to do with their benevolence towards the people living in Ireland but more about their capacity to a) import cheap goods into the country from the Global South and b) compete among each other in a tightening market. Finally, an employer, yes, that Lidl is, but it’s also an employer that is anti-union and does not permit its workers to engage in collective bargaining, refuses to recognise trade unions and ultimately exists for one purpose: the creation of profit. The lesson to take away from this is that the power of capital is well ingrained in our collective mentality to the point that we do not see the class contradictions in society and immediately leap to the defence of the ruling class, wherever it may be operating.

Ultimately as Communists we have to guide the way in revealing the propaganda and baseless moralistic presuppositions of discourse around contemporary events. The criminal opportunism of some people is reprehensible but it serves a role by revealing the blindness society shows compared to the corruption of the blueshirt regime and the continued exploitation of Ireland by US multinationals, the EU and the gombeen factions within FF/FG/Labour.