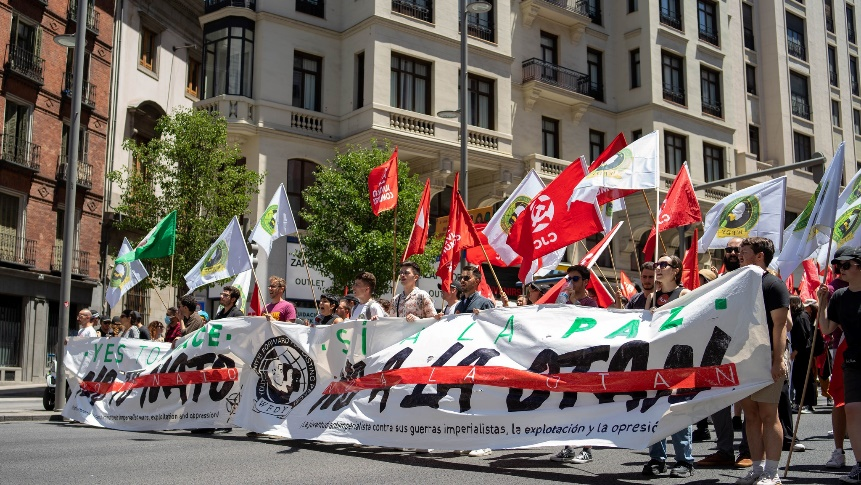 Between 26 and 28 June 2022, members of the Connolly Youth Movement took part in the Committee of Europe and North America (CENA) Camp in Madrid, organised by the World Federation of Democratic Youth (WFDY). There we were joined by many other young communists we enjoy fraternal links with through the organisation.

The purpose of the CENA Camp was to highlight our opposition to the war in Ukraine and NATO. We also used the camp as an opportunity to reiterate our demand for the release of two Ukrainian communists, Mikhail and Aleksandr Kononovich, who continue to be detained by the Ukrainian state. We made our demand clear by staging a brief protest outside the Ukrainian embassy in Madrid.

Throughout the event, delegates from each organisation gave detailed reports on the current political situations in their respective countries as well as the recent work they had carried out. Issues impacting working class communities around the globe such as the cost of living/energy crisis, draconian trade union legislation, housing, neoliberal education reforms, and attacks on neutrality were raised, and discussed.

Delegates from the CYM made it very clear to their fellow comrades that Irish neutrality has come under a renewed wave of attacks from the vastly unpopular government of the 26 county state since Russia’s invasion of Ukraine in February. There have been calls from government leaders for Ireland to ‘have a fundamental rethink over security’, which can be interpreted as a long-term goal to completely abandon any semblance of a neutral foreign policy within the 26 county state.

These attacks on Irish neutrality are not new. Aside from the most cited example involving the use of Shannon Airport to refuel American warplanes, it must be acknowledged that since the six counties are a part of NATO due to the ongoing British occupation, Irish neutrality cannot properly function when the country continues to be partitioned and occupied by an imperialist power. It is clear that there must be fierce opposition towards any future attempts to drag Ireland further into another imperialist alliance that does little to safeguard the welfare of the working class from all over the island.

Delegates from the CYM had the privilege to hold bilateral with comrades from the Colectivos de Jóvenes Comunistas (Spain), Kommunistische Jugend Schweiz (Switzerland), Young Communist League (USA) and the Juventude Comunista Portuguesa (Portugal) where we were able to learn about the ongoing work of each organisation and the current situations within our own countries.

WFDY delegates also had the privilege of getting a fascinating insight into the historic working class tenant struggles within the barrio of Orcasitas in Madrid, before attending a symposium on NATO, the war in Ukraine, and the background leading up to the invasion itself.

On the last day of the CENA Camp, delegates took part in a protest in the run up to the NATO summit that was then due to take place. Large numbers turned out on the day of the protest where the opposition to NATO and its expansionist goals were made loud and clear. The protest was able to attract significant attention from the media in Spain.

The CENA Camp in Madrid was a great opportunity for comrades to express international solidarity and our undying opposition to NATO, the ongoing war in Ukraine as well as the detention of the Kononovich brothers. By understanding the numerous examples of western governments neglecting the needs of those residing in their respective countries in favour of providing arms and helping to prolong the war, it is clear that the communist movement along with all other progressive movements in Ireland need to take a strong stance in opposition to NATO and to oppose any attempt to drag the country further into either its clutches or any EU armed force.