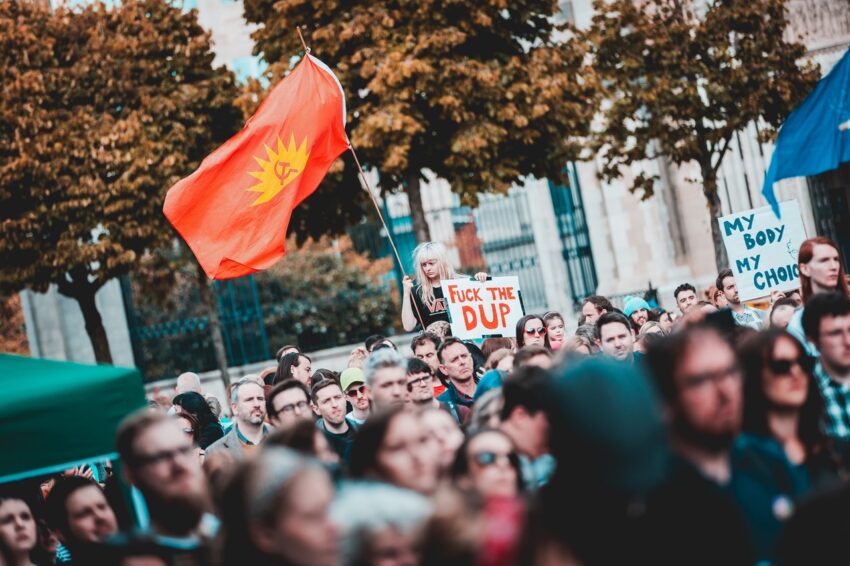 In January 2017, the leading parties in the Stormont executive, the DUP (Democratic Unionist Party) and Sinn Féin, split over the DUP’s handling of a green energy scandal, causing the executive to collapse. This meant that, in the absence of executive ministers, civil servants were running the country. However, because civil servants have limited powers, they can only administer and implement policy, and as such were hesitant to make decisions outside of their remit, including any changes to laws on abortion.

A year later on 25 May 2018, after tireless campaigning by pro-choice activists across the island, the referendum to repeal the 8th Amendemnt passed in the South, legalising abortion up to 12 weeks, with provisions for later terminations in restricted circumstances. This both inspired and frustrated the people of the North, where abortion services still remained limited.

In February 2018, a UN committee released a report stating that the UK has been breaching the rights of the women in the North by limiting their access to abortions services. This followed a decision by the Belfast Court of Appeal, ruling that NI aborton laws are a matter for the Stormont Assembly, which overturned the 2015 High Court ruling that found Northern Irish law had breached the European Convention on Human Rights.

Regardless of this report and the demands of people in the 6 counties who had been campaigning tirelessly for years, changes to aborton law could still not be made due to the lack of an executive.

With the stagnation of Stormont, changes to the law in the South, and the North having the most restrictive abortion laws in the UK, MPs in Westminster made a decision that shocked many of us.

In 2006, the St Andrews agreement was signed which decided that Westminster would not implement direct rule (the governance of NI directly from Westminster) without passing a law in parliament. This meant that direct rule would only be implemented in extenuating circumstances. As such, the decision of MPs in Westminster in July 2019 to back an amendment to the NI Executive Formation Bill was extremely surprising. This bill would lead to significant changes to abortion law in NI unless Stormont could get back up and running by October 2019.

October 2019 came around and devolution was not restored, meaning that abortion would now be decriminalised and same-sex marriage would be legalised. It was a contentious move: many people, especially republicans, did not like the idea of being governed from Westminster, and while this concern cannot and should not be ignored, this particular situation was a relatively positive one.

This was a momentous occasion for people in the North. I remember walking around Belfast the night the news was announced. There was a buzz around the city, bars were full of people celebrating. The collapse and stagnation of Stormont had a horrible impact on all of us, but finally there was something to celebrate. It felt like the North was finally moving forward a bit.

However, the words of Bernadette McAlisky just a few months earlier had warned us of what was to come. Many people thought abortion rights had been won, but there was still a long way to go.

“In those heady days that look like victory, be careful, for you’re never over the finish line”

Devolution was restored in early 2020, and the NI executive had already began designing new abortion regulations. The British governemnt went on to publish details of the new legal framework for abortion services in the North that would take effect from 31st March 2020. However, the regulations state that it would be up to Stormont’s Department of Health to commission full services.

Interim services were set up in April 2020, but they could only provide services for up to 10 weeks of pregnancy. For an abortion outside of this window, people would have to travel to Englands. In 2020 371 people were forced to travel to England and Wales for abortions and although funding was provided for this, it is hard to effectively express the mental toll travelling, especially during the Covid-19 pandemic, would have on someone seeking an abortion. This is a situation which disproportionally impacts working class people who cannot afford to pay for abortion pills and may not be able to take time off work for recovery, never mind travel.

In April 2021, the Western Health Trust announced a suspension of interim services from 23 April as the system was no longer sustainable. This meant accessing an abortion in the North became a sort of “postcode lottery”.

By 2021, abortion services had still not been commissioned and rolled out, with a highcourt judge ruling that the secretary of state Brandon Lewis had the legal authority to direct the establishment of abortion services, and failed to do so.

Unsurprisingly, in 2022 we are still waiting for the Department of Health to centrally commission services. Brandon Lewis recently visited the North, claiming that if he does not see positive steps in the, “very near future, the British government will take action”. However, there is no indication of what this “action” will be or how long we will have to wait. Minister of Health, Robin Swan, who happens to be a pro-life member of the Ulster Unionist Party, has said that he is seeking “legal advice” on the issue.

In England, Scotland and Wales, the Abortion Action 1967 legalised abortion up to 28 weeks gestation. In the North, we are still waiting for any functioning services in 2022.

The struggle for bodily autonomy will continue, and as Bernadette McAlisky stated, we should not become complacent. We have recently witnessed the stripping back of abortion rights in the United States, and the arrest of Justyna Wydrzyńska, a human rights defender who faces up to three years in prison for supporting a pregnant woman who needed a safe abortion in Poland.

So long as we live in a patriarchal, capitalist society, our fight will continue.

2 thoughts on “The North is When? Abortion Rights in the Six Counties”