This week in North Belfast Lidl opened a new store at Hillview Retail Park on the Crumlin Road. This opening was met with glowing reports in the press with the Belfast Telegraph claiming the store will create “35 new retail jobs and a further 250 jobs during construction”.

The newspaper report continues with more soundbites from the retail park manager. “Our new store means that more people can now shop local for essential groceries right in the heart of the community and enjoy our Big on Quality, Lidl on Price proposition which has resonated so well with communities across the region”.

This story does resonate with communities over the North. It is a very familiar story, one which goes back to the Orange State.

The Hillview Retail Park has been without a key anchor tenant and has remained largely empty since 2007. Despite calls from residents and housing charities for social housing to be built on the Hillview site from at least 2016, Belfast City Council brought forward plans for a retail only development. In other words, families under crisis-levels of housing stress have been ignored. Worse still, they will have to get their shopping where they could have had a home.

2,835 people on the waiting list in North Belfast with 96% of that need concentrated in the nationalist community, according to figures from The Detail in an investigative report earlier this month.

Instead of being able to avail of low cost and good quality housing, those waiting for social housing will be forced into the private housing market; big on price and little in quality. In the private market, renters will be at the whim of private landlords. It is either this or they will be forced to keep living in social housing that is criminally underfunded, with many reports of damp, mould, and mice infestations. The COVID-19 pandemic and the repeating crises of capitalism has only increased the number of people waiting for accommodation.

The Hillview site is on an interface between the unionist Edenderry estate and the nationalist communities in Ardoyne and Oldpark.

If housing need were satisfied in North Belfast to the tune of nearly 3,000 homes, this would present an existential crisis for the DUP in the area. In predictable fashion, ex-North Belfast DUP MP, Nigel Dodds, was an ardent supporter of the redevelopment, and his party have ensured they got it over the line at the expense of working people. Very familiar indeed.

This is a continuation of sectarian housing policy. We were told this would be addressed by the Good Friday Agreement and by the Stormont administration, but not much has changed it seems. This is trademark late-stage unionism. It seeks to maintain the unionist majority at all costs by denying access to housing and at the same time welcomes foreign investment to profit off the backs of the same working people the DUP claim to represent. This of course, is all repackaged as a feel good “job creation” piece in the press. Sectarianism and capitalism are the perfect fit.

If we take a step back, Belfast City Council is unable and unwilling to put the needs of those waiting for adequate housing before the needs of the German supermarket, which had a pre-tax profit of £2 million in 2020 from its Northern stores. The obvious contradiction here is that the DUP is more than happy to have a large European supermarket in North Belfast, facilitated by the alignment between Northern Ireland and the European Union, if it means that Catholics do not get houses.

The Connolly Youth Movement’s programme states: “the only way to resolve the housing crisis and end property speculation is to consider access to shelter a human right”. While this right to housing could theoretically be incorporated into the 26-county constitution, the democratic drought in the North makes this impossible. There is no democratic mechanism that can enforce this right.

This brings into light the alignment between the social question, the needs of the working class, and the national question, the right of self-determination for Ireland. Only an independent and sovereign Ireland will be free from the artificial unionist majority and only socialism can relegate our current housing crisis to history. Break the connection with Britain! Break the connection with capitalism! 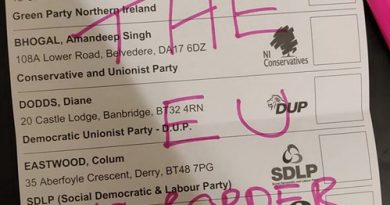