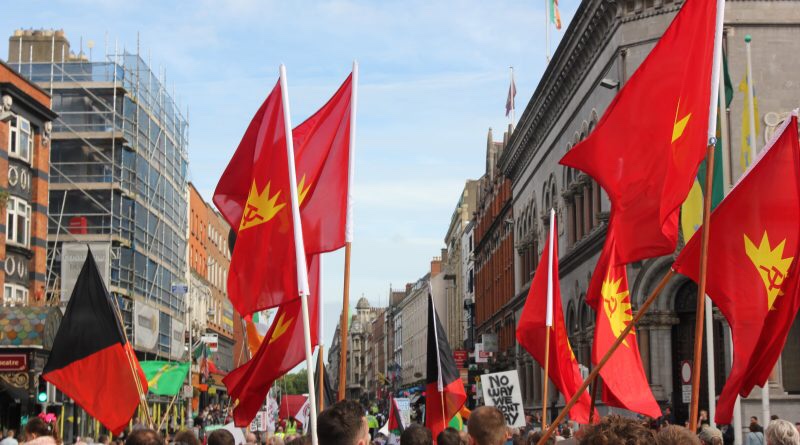 Amendment to constitutional article on branches

The Chairperson of the branch is tasked with: Organisation of branch and committee meetings, set the agenda in liaison with the branch secretary and committee, direct and encourage the branch to work towards the fulfillment of the Programme.

Amendment to constitutional article on Membership

7)  If a member of the CYM leaves Ireland or is not based in Ireland their membership will be considered “frozen” and available upon return – but they are not to be inside any internal communication channels and will be notified of this before being removed. Exceptions determined either by a Branch or the NEC can be arranged for example if a member knows they will be back or is fulfilling a job for the CYM while abroad. Official communication channels such as WhatsApp, Facebook both branch and national.

Amendment to constitutional article on the National Executive Committee

6. The Editor of Forward will be appointed by the NEC as a non-voting position to manage, run and direct the affairs of Forward. A screening process appropriate to the position will be established by the NEC.

7. The System Administrator will be appointed by the NEC as a non-voting position to manage, run and direct the website and all other technical online requirements of the Connolly Youth Movement. A screening process appropriate to the position will be established by the NEC.

Amendment to constitutional article on the National Executive Committee

The introduction of the position of Youth Protection Officer to the National Executive Committee. This role will develop a program to ensure the wellbeing of our members and act as a mediator in any personal disputes. This role will also co-ordinate Youth Protection Officers in each respective branch.  Duties to include: liaising with branch officers, drafting of a child protection policy, port of call for all members with guidance, point of contact for parents and guardians for underage members and the officer must be over 18.

Proposal to amend the programme

In accordance with our desire to see political power in the hands of the working class, it is equally our objective to develop a ‘red’ counter-culture to the hedonistic, liberal, individualistic and self destructive culture promoted within capitalist society.  We do not subscribe to the notion that to be in consistent contrarianism to capitalist society does not necessarily mean this is the correct approach.

Proposal to amend the programme

Recent events, stimulated by the Brexit vote have created a scenario wherein serious consideration is being given to Irish unity by forces traditionally opposed to it in the North. The mechanisms contained within the Good Friday Agreement provide a slim opportunity to achieve unity.

Proposal to amend ‘Resolution on Trades Unions and the Workplace’

The CYM condemns the Industrial Relations Act (1990) and the equivalent legislation in the 6 counties and will work alongside trade unions and the workers to have the legislations repeal. These Acts have been maliciously used to consistently worsen the conditions of the working class and draw back all advancements made throughout the 20th Century. The Acts restrict workers to have to beg and plead the bosses and the state in order to use industrial action. They are a large reason for such drastic decline in union membership over the last 30 years and have kept the working class, particularly youth, stagnant whilst profits continue to grow for the ruling class. We recognise all of this and will work to repeal these acts as it is necessary for the shifting of industrial power to our class.

Proposal to add a Resolution on Education

Third Level Education is increasingly being privatised and made to serve the needs of private industry and quantify research and achievement as profit-oriented targets. The quality of courses and the conditions of lecturers and students are being devalued as their work becomes an exercise in building up the flexibility of labour rather than in building up the expertise and confidence of individuals and generating new research for society and its productive forces. One of the goals of the communist movement must be to arrest this trend and force a confrontation on the idea of the university/college/institute.

1.The system of private schools, charter schools, and cram schools that are privately funded should be abolished. Current state funding to fee-paying schools should instead be utilised to provide programmes for public school students who are struggling.

2.The CYM supports a merit-based system of     selection and matriculation for third level positions that is disconnected from financial background. Tuition should be abolished, and places allocated solely on the basis of performance rather than ability to pay.

3. Free and sufficient student housing should be supplied by the state as a fundamental prerequisite to the operation of any educational institution.

4. Third level grants and funding should be combined into a comprehensive agency that can means test and financially structure programmes to allow students from any background to support themselves at a standard of decency throughout their term of education.

5.Executives of educational facilities of primary, secondary and tertiary institutes should be elected by the scholar-body and accountable for culpability in corruption or financial malpractice by state oversight. A watchdog institution should exist to examine whether the resources in third level education are being diverted.

6.Public-private partnerships between educational institutions and vulture funds should be abolished, with the latter required to withdraw their     personnel and representatives from campuses.

7.Vocational support should exist to help graduates to explore their options and find fulfilling employment related to their studies.

8.Mental Health support connected to universities should be expanded in its power to make recommendations to academic staff and     institutions. Students who are struggling due to work-life balance should have recourse to changes to their situation with meaningful impact.

9. The system of private schools, charter schools, and cram schools that are privately funded should be abolished. Current state funding to fee-paying schools should instead be utilised to provide programmes for public school students who are struggling.

The following instructions are passed by Congress to instruct the NEC to act on.

Constitution and any official documents of the CYM to be translated into Irish.

as providing a service to Irish Speakers.

This motion calls on the NEC to write a comprehensive policy advocating for:

CYM to fully endorse and support the “An Dream Dearg” campaign for an Irish Language act in the North and South. The freedom of expression of Irish culture should not be impeded by Fine Gael, Fianna Fail and the DUP.. The native language of our island must be protected and promoted. The CYM encourages its members to learn and use Irish.

CYM recognizes that Stormont as a political entity represents the failed social and political imperial project of Britain which is ‘Northern Ireland’. We wish for our elected institutions to operate so funding can be allocated to essential health and welfare services during our ongoing crises. Although we recognize that only through re-unification can the sectarian deadlock be broken.

That the Congress attendees send a message of solidarity to the oppressed people of the world, with notable mention of Venezuela/Cuba/Syria who are under constant attack by the Western imperialist bloc.