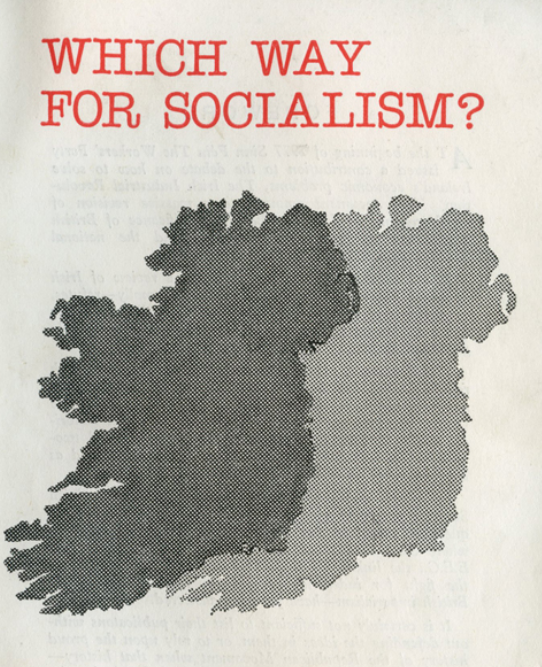 “The semi-radical phrases with which the middle-class Home Rule Press and politicians so often duped the public (and sometimes themselves) were seen to have no radical feeling behind them. Sham battle-cries of a sham struggle, they were hurriedly put out of sight the moment the war-cries of a real conflict rose upon the air.” – James Connolly

It may seem at times that the Communist attitude to elections is loosely based on Pascal’s Wager – we don’t believe in elections, but we’ll vote and run candidates (just in case). This is an uncertainty that we have to explore to justify our existence as a political movement. We’re rightfully optimistic about an increasing momentum for the Communist movement culturally and organisationally, while electorally the social democratic left seems to have hit a dead end that it can’t progress beyond. Questions are naturally on people’s minds about the future and relevance of electoral politics for our generation in a brave new political landscape where many political voices have emerged alongside the traditional dominance of Fine Gael and Fianna Fail. However, one of the potential outcomes of this healthy scepticism of bourgeois democracy is the daunting prospect of being left outside in the cold as a non-participant in the political discussion and enthusiasm that surrounds elections. As political partisans, our main priority should be to get it all – to have the amplification of our voices that political participation brings, yet without the foibles inherent in measuring our success solely by the performance of candidates.

Communists have sometimes been hesitant to face the ballot in Ireland, and one of the obvious reasons for this is fear of a residual climate of political repression. Even when communists engage in legitimate protest, like the recent action of the Connolly Youth Movement aimed at exposing Leo Varadkar at a public meeting in Cork, those on The Right (including Varadkar himself) immediately cried anti-democracy and stoked the inevitable allusions to the gulagthat our opponents use to prop up their anti-people policies.Neoliberalism is largely in a political bind when it comes to communists and class struggle, because its proponents largely pay homage to “the marketplace of ideas”, confident that as in any competitive marketplace, those with the highest starting capital will end up casting the deciding vote. This outward willingness to tolerate criticism is shown to be a screen, however, when it comes into contact with advocates of a totally different value system – with a political outlook that places the ultimate value on human development, empowerment at work and cultural authenticity rather than on the profit principle. Since neoliberal ideology pretends to welcome transparency and open challenges, it must constantly avoid direct challenges, to prevent its repressive character from being exposed.

How does the communist movement fare in raising these challenges? The Workers’ Party has long walked the strange path of a party of qualified electoral socialism, simultaneously downplaying its connection to the potentially toxic title of “communist” on the doorstep while engaging in Leninist theoretical disputations online. The result of this strategy of split identity has been consistent failure to win an electoralbreakthrough because of a lack of authentic unity of theory and praxis. The Workers’ Party is locked out of local government by groupings with higher membership that arewell-resourced and adept at the canvassing game, while non-electoral activism suffers as consequence. Much of the same criticism can equally be forwarded to elements of many parties on the Irish left. Often, in politics, when you compromise your principles to gain electability you end up with neither, and this is a problem the younger generation of these parties will need to face sooner rather than later. These parties can engage critically with the policies of Fine Gael and Fianna Fail, but they are forced to stop short of bringing the truly disruptive arguments to bear that could capitalise on the growing interest for full alternatives to capitalism that can elevate language, environmental protection, reunification and other issues that are currently frozen by capitalism.

There are lessons of strategy in all of this. Communists don’t have the canvassing power, a complex web of donations, or the bargaining chips required to win seats through the same tactics as social democratic parties. What we have are a collection of arguments that are, on the face of themselves, capable of providing people with explanations for the struggle of their lives with a completeness and a potential for change that no other political ideology can provide. Communists cannot hide behind innuendos or cloak their message under the guise of community politics. Communists have to be loud and out in the open, putting their message directly to thecountry, seizing theatres of debate to cover the issues important to them, and pursuing these viewpoints vigorously and without hesitation.

Opportunities come and go everyday in the political sphere as the government provides opportunity after opportunity for communists to talk about class. The Fine Gael government siphons off enormous amounts of wealth onto the merry-go-round of its social caste on bloated tender projects while advocating in no uncertain terms a gradual return to tenement life. Meanwhile, Sinn Fein is swinging to the right and haemorrhaging working class votes as the middle class rejects it with its automatic distaste. The Irish left is a scene of various characters playing at being everything to everyone, when everyone knows that’s they’re not. Its inevitable that a lack of commitment to purpose will hand victories to an incompetent right.

The Green Party, riding in on their “wave” would like nothing better than a convenient coalition, and Fine Gael or Fianna Fail will be happy to welcome them as an icebreaker of the dangerous impasse that touched Irish politics in the aftermath of the crash. The Greens will be happy to play favourites and bring back a few bespoke articles of highly refined spin to their constituents. Communists can’t let them get away with their brazen support for capitalism’s imminent course for ecological disaster. Communists can’t let them get away with their tolerance for horrendous working conditions in Ireland and support for greenwashed multinationals that still oversee the systematic impoverishment of the developing world and the poisoning of vast ecosystems, the betrayal of our nationhood by the surrender of our natural resources to profiteers.  The Greens are exposed to attack on the Left flank like no other political party in Irish history, and it would be a manifest failure of the purpose of the Communist movement not to take them to task on it. Environmental issues are class issues, and class issues are environmental issues.

There’s a sense of urgency in everything we do now, as economic and environmental catastrophe looms on the horizon, and the old habits of taking political losses stoically and settling in for the long haul will no longer cut it. We are communists, and we cannot accept as our highest hope and the limit of our aspirations that next time it will be one council seat instead of zero. We need to develop a new kind of politics that returns to very old principles of activism, that approaches things with a view to the whole and the complementary integration of struggle of every type into our strategy. Every constituency needs a self-avowed communist candidate, and The Right needs to be continuously justifying why issues of class and capitalism are not on the agenda of all political discussion. An all-Ireland communist platform could share one national manifesto with themes that candidates can combine with local issues and work.

We must avoid the failures of self-perpetuating electoralismand strive not to waste our resources on the pursuit of short-lived voting trends. We need a permanent presence in the political sphere through the running of candidates on deindividualized manifesto, focused not solely on local issuesbut on the shared national conditions that makes the satisfactory resolution of local issues impossible. We need a party that is able to expose the mediocrity of the liberal parties, that is able to advance clear and concise slogans that initiate the process of questioning the direction of the country, that is able to propagandise in a way that turns every room FG/FF/Labour/Greens enter into the scene at Clayton Hotel last month, with their representatives running away with their tails between their legs rather than face the failure of their policies to serve the needs of the majority of Irish citizens. By running candidates with minimal resources as a communications strategy to propagandise political struggles taking place outside of the election cycle. Communists can use elections to underline that the change that electorate is demanding requires a total transformation of society. Why spoil votes when you can spoil the whole narrative?

Such an ideal left party needs to take the benefits of publicity and participation that running candidates offers, while attacking the legitimacy of the “loyal opposition” and the liberal democratic system through union work and civil disobedience in communities. It is only possible through combined tactics that the mistakes of our opponents will properly be seized on. Contesting elections should not be seen as anything remotely near a goal in and of itself, but should be seen as a completely procedural tool with the potential to destabilise the system by forcing it to engage in direct dialogue with a point of view that can’t be reconciled to it. One candidate shouldn’t be going to the people solely on local issues – each candidate should be highlighting the same universal concerns in every constituency, forcing people to criticise the common foundations.

A programme that consists of three principles like the following could easily introduce a totally new meaning of communism to the lives of Irish people:

Restoration, of our environment and our national linguistic heritage. Where the richness of our common resources, economic and cultural, are protected for the enjoyment of all.

Renationalisation, and the total uprooting of the system of economic exploitation to guarantee that those who work in Ireland are treated with dignity from cradle to grave.

Reunification, with a new Republic and a new constitution that reflects all those who live here, founded on collective principles rather than the rights of the individual capitalist.

1 thought on “How Communists Can Use Elections”