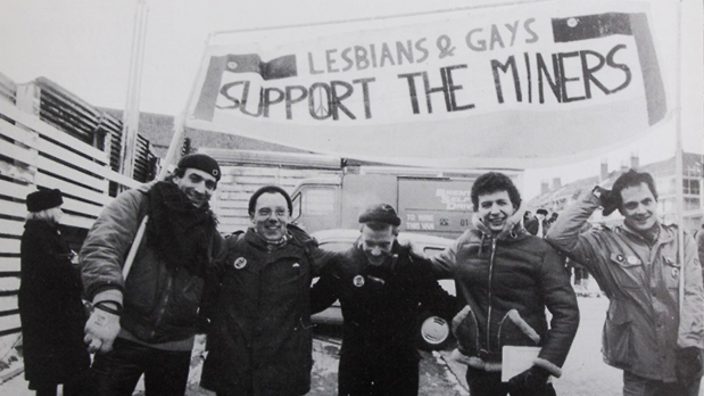 This article was first published in the latest edition of Forward.

Historical context is important to our activism; knowing that working-class solidarity and past struggles have had benefits for us today. Unfortunately, especially when it comes to the most radical activities, these stories seem to be forgotten about and washed away by the sands of time, as verbal accounts die out and right-wing media write the first draft of history. It’s great, then, that we have a record of the achievements of solidarity movements and activist groups that got a standing ovation at Cannes Film Festival.

Pride is a 2014 film from celebrated theatre director Matthew Wachus and written by theatre writer and actor Stephen Beresford, being his first film screenplay. It tells the true-life story of Lesbians and Gays Support the Miners (LGSM), an alliance of lesbian and gay men supporting the UK miner’s strike of 1984-85. They are invited to a small mining town in Wales called Onllwyn and strike up an unlikely friendship with the residents. The group was founded by Mark Ashton and Mike Jackson (portrayed by Ben Schnetzer and Joe Gilgun respectively). Ashton gets a lot of the focus of the narrative and while the movie doesn’t exactly downplay his political leanings, it’s never made explicit that he was a member of the Communist Party of Great Britain and general secretary of their youth division. Despite this, the film is not afraid to wear the symbolism of LGSM’s politics on its sleeve. It opens with Pete Seeger’s Solidarity Forever, a poster of the October Revolution on LGSM’s bus, and one of the biggest motifs is an old union banner in Onllwyn of two hands clasped together.

Ultimately, what makes this movie so great is its accessibility. You don’t have to start with an agreement with the characters’ politics to understand the core of what this film is about: solidarity. Here are two groups being marginalised by Thatcher’s government; the LGBT community and the miners. Ashton outlines early on that police tactics on striking miners are similar to how gay people are targeted. It’s not that their situations exactly align, it’s that they are both the victims of systemic prejudices and know what it’s like to be powerless. It’s finding that commonality that creates bonds and sympathy for a cause. “Our unity is our strength” says Dai Donovan, played by Paddy Considine, in a poignant speech about the surprising comradery fighting an enemy stronger than you can bring. No matter who you are, you can be taken advantage of by the capitalist system if you are seen as an inconvenience.

There are subtler points on activist circles that this film depicts really well, from madcap ideas and stunts to the general wryness, cynicism, and injokes, the loosely structured but still serious meetings. The consistent rejection due to larger bodies not wanting to be affiliated with you. The splinter groups to tackle certain other issues. There’s a scene where they list off legal procedure the police must follow to arrest activists, showing there’s a need for them to know this for their own personal safety because of their sexuality – go up to most activists and they could rattle off laws like that to you almost by heart.

Most important is the comradery; the unspoken bonds and trust they have with their comrades. I love how the owners of Gay’s the Word, LGSM’s hub and the only gay-themed bookshop in

England allow other members to sleep at their houses. These young people were clearly kicked out and ostracised by their families, but here they have the support they need. In the end, this is the sense in which the LGSM mirrors the role of the union in the community. They have an impact on each other, with members of the mining community engaging with issues around sexuality at home and nationally, while many of the group re-connect with working class values.

Most importantly, this movie is just fun! I’ve described it before as a politically charged Richard Curtis film (though not as treacly). Full of delightful British wit and cynicism but with a genuine warmth and earnestness that feels earned by the climax, we have a film that has lengthy discussions about the bonds of union might and solidarity contrasted with women drunkenly laughing over finding massive dildos in some lad’s room. Seeing Jonathan Blake, played by Dominic West (Blake was one of the first HIV positive patients diagnosed in the United Kingdom and, as of writing this, he’s still alive) dancing at a Welsh community centre to “Shame Shame Shame” by Shirley and Company – I wouldn’t trade that for the world. The real Blake has claimed he never danced that well, mind.

I don’t want to give away the ending, but goddamn if it doesn’t hit me every time I see it. You can look it up as it’s a true story, but I would say try to go into this unspoiled. It’s such a powerful, resonant note to leave off on. And it’s a shame that this story has been buried for so long. It really shows the power of working class activism and solidarity through multiple perspectives. It’s a really inspirational flick that really makes you feel that you can make a difference. DK.