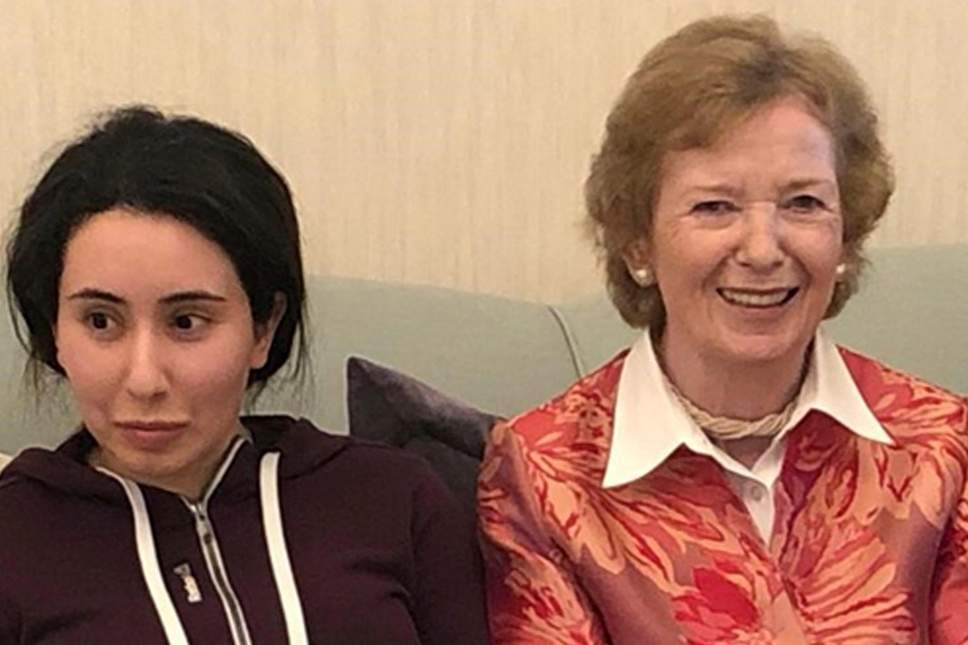 During an otherwise quiet Christmas news week, a bizarre story has cropped up on the screens and papers of Irish readers. Mary Robinson, former president and a much feted and glorified patron of Irish liberalism, has had a fateful run-in with another prestigious brand of quasi-royalty – one of the ruling families of the United Arab Emirates. Robinson is a steady fixture of the Irish talk-show and documentary circuit, showing up regularly to extol her virtues as a champion of women’s rights, blazing the way for others through her election to the highest office in the land. She finds herself in such liveried pages as “Labour’s Proud History”, documenting her success as a stalwart of the party. She is a former UN Human Rights Commissioner and has been recipient of more awards and distinctions on the “Human Rights” career path than could be listed on this page. By dint of these credentials, surely this latest entanglement must have been a case of her standing up for the rights of people living in a monarchical dictatorship where slave labour, union-busting and political disappearances are normal everyday occurrences?

No, because the United Arab Emirates is a political ally of NATO and serves the strategic interests of the wealthy elite of Western nations, Mary Robinson’s role is to provide political cover for the brutal kidnapping of a young woman, Sheikha Latifa, who has not been seen since she was grabbed off a boat by Special Forces of the Emirates, may be at risk of torture or worse and is not allowed to speak to the public. The surreality of this situation is what makes this so gripping, and we have to remind ourselves that we live in a world where Tony Blair still worms his way into the pages of national papers and party conferences despite spending his spare time chumming around with dictators, where Obama received the Nobel Peace Prize while laying the foundations for new invasions and more bodycounts, and where the bright sparks of liberal politics gave a scroll of titles not dissimilar to Mary Robinson’s to someone who is currently overseeing an ethnic genocide in Burma. The reality is that that these political organisations are fronts for the narrative of global capital. Their wishy-washy liberal politics and ‘humanitarian’ concerns are phony stand-ins designed to cloak their interests, aims and intentions. They are funded by the wealthy and powerful of the world for the wealthy and powerful, and their humanitarian concern is a selective concern, applied only when it aligns with the foreign policy of the national governments that set the consensus they operate to.

What does a Non-NATO ally of the West look like?

It looks like a monarchy with no elections or freedom of press.

It looks like a place where you can be forcibly disappeared, tortured and murdered for trying to form a political party or speaking out about workplace abuses and rights.

It looks like a court system governed by Sharia law where flogging and stoning are accepted judicial methods, there is no right to a fair trial, and homosexuality is criminalised and met with the death penalty.

Mary Robinson, a darling of the more spineless liberal left in Ireland, has told us that she is a friend of the autocratic regime of this country.

She has told us that a woman who tried to escape from imprisonment, not the first in her family to attempt to do so, is mentally ill – a ‘troubled’ person. She has alluded to Latifa’s treatment by family doctors as evidence of this, seemingly totally unaware of the possibility for psychiatry to be politically abused.

She has made a public press statement, giving her name, with all of the pomp and privilege of a formal reception, to the shady disappearance of this woman into a system where there is no transparency, where there exist no judicial checks and balances, where there is no possible way of verifying anything without the interference of a powerful repressive state apparatus backed up by the same individuals who finance her and her career.

Because, she says, she’s a friend of the royal family.

Moreover, she’s funded through dodgy sources. She operates an organisation, the Mary Robinson Foundation (as any good Human Rights stalwart does), which operates on the basis of private donation. The 2017 annual financial report of the Mary Robinson Foundation lists a member of the Royal Family of Qatar, Her Highness Sheikha Moza bint Nasser, as one of its funders. People like Tony Blair, Mary Robinson and Hillary Clinton go where the money is, and in oil-rich states like Qatar and the UAE, the ruling class has no shortage of funds to buy goodwill. [1] The possibility comes to mind that like the Clinton Foundation and countless other front organisations for political actors, Mary Robinson might have received ample compensation from the powerful gangsters she has lent her name through officially sanctioned receptacles for cash flow.

As Marxist economist Richard Wolff has pointed out, in the current geopolitical scene, influence and interference are no longer produced by nameless agents dropping in by plane to advise contras. They are enacted through a complex network of NGOs enshrined with the political influence and weight of world governments, operating in the interstices of deregulated environments to set up financial networks of patronage and income. A political figure gains funding for one of their pet projects and the prestige that comes with, and a dictatorship or oligarch gets a PR boost. It’s a symbiotic, mutually beneficial relationship between those familiar with exploitative economic power and the optics that transform it into philanthropism. These empty liberal interpretations of environmental and identity politics, funded and linked in with a shady sector of NGOs and ‘progressive’ corporations, need to be re-evaluated by the left at large. For all Robinson’s talk about Environmental commitments and Human Rights, she has remained totally silent to domestic crises, particularly the Shell2Sea controversy, where she stonewalled activist attempts to contact her [2]. These PR-friendly endeavours need to be criticised and ended for the role they play in whitewashing the foreign policy of Western states in supporting brutal dictatorships in the developing world on the condition that they stay open to capitalism. The war hawk voices in Young Fine Gael and other parties will readily tell you that the ‘West’ needs to invade countries to topple dictatorships for regime change, while they cosy up to the wealthier ones that support capitalism. Clearly the issue here is not that certain countries are committing human rights abuses, but rather that they are not following the rules of the global market.

If the experiences of the last ten years have left doubt in anyone’s mind about the nature of the structures and institutions of liberal democracy, let this erase them. Are our circumstances that morally disconnected from those in the United Arab Emirates if we tolerate our own former elected representatives to act as emissaries for kidnappers and apologists for violent repressions? No doubt Mary Robinson will be back on our screens soon, telling us more hopeful stories about the role she played in granting us our freedom through the noble path of electoral politics. Soon she’ll be back visiting schools and conferences as a dignitary. But the reality is that she and the system which she represents are fraudulent. The same voices on the left that speak incessantly of the dangers of radical politics, of the risks posed by the oppressed taking back control of their lives and their communities, are the ones signing off on weapons parts exports and supporting immense destruction of human lives and dignity. Solely because the people doing the destruction are one of them, part of an international community of an elite whose lives and words matter more.

These individuals must be rid of every last shred of legitimacy. The self-aggrandising waffle that they emit using the screen of state legitimacy has to be muted. The voices of workers suffering in Dubai, without a right to unionise, murdered if they raise complaints, need to be heard. The voices of the workers of Ireland, turfed out of their houses by representatives of an electoral system which is broken and defunct, need to be heard. The voice of Mary Robinson, battling for the rights of local tyrants in the UAE to imprison their family members, needs to be rebuked. The beliefs and crimes of the establishment political culture of complacency and complicity she represents need to be rooted out and never forgotten. FT.