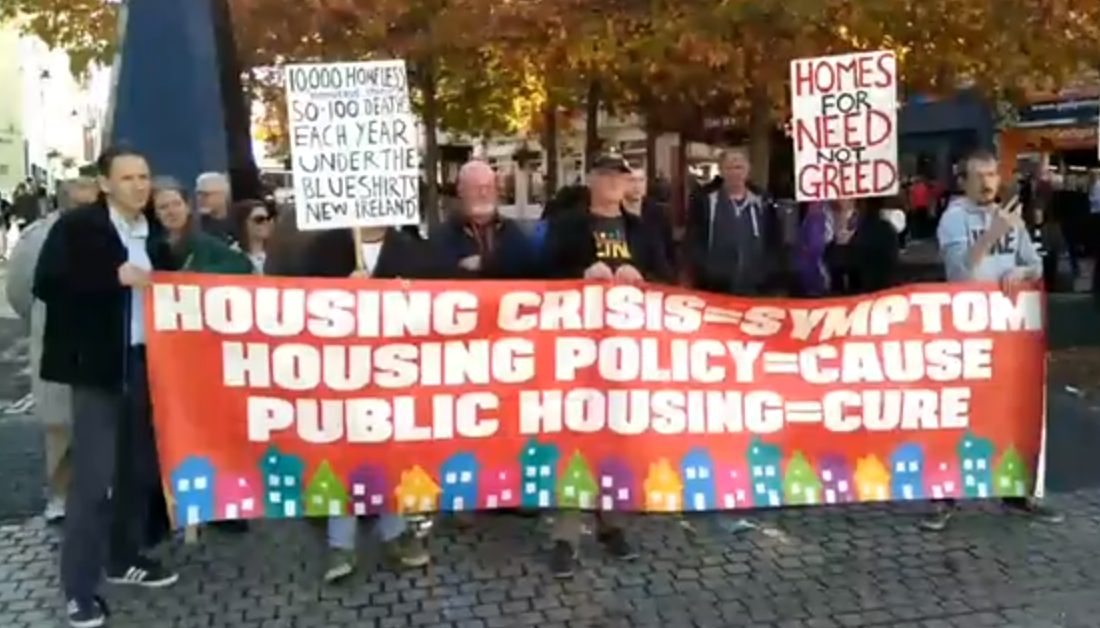 My name is Alex, I am a member of the Connolly Youth Movement. As a student of Connolly’s thoughts and writings, a very short yet perfect quote springs to mind:

Governments in capitalist societies are but committees of the rich to manage the affairs of the rich..

What Connolly meant, simply, was that the State, operated by the same few parties of Fianna Fail, Fine Gael and the Labour Party benefit only one economic community in Ireland and friends I tell you now, that is not us! It is the banks, the property speculators, the landlords, the vulture funds and the employers who continue to year after year reap the rewards of austerity! For friends what is austerity but the destruction of public services and the movement of wealth from the worker to the exploiter?

Every budget and every policy since the foundation of the State has cemented the political and economic power of one community in Ireland. Ireland is one of the most economically unequal countries in Europe where the top 20% control over 70% of the wealth. I ask you all, IS THIS FAIR OR JUST?

What KIND of Ireland do we live in that has turned every important aspect of our society into a commodity? What kind of Ireland do we live in when HOUSING, something so obvious, so important is treated not as a right or a need but as something  that can be a made profit from. It is treated as a euro sign and those who RENT and LIVE there as CUSTOMERS! But are we, workers and people, simply customers that live to pay our rent and mortgage or are we worth more? To them, WE ARE WORTH MERELY BY WHAT WE CAN PAY!

When the 1916 Declaration was read and the green flag flown, it was made clear: the common ownership of Ireland for the people of Ireland and the complete mastery over our own destinies. That vision has not yet been achieved but friends, I believe that it can be. Friends, every time we march, protest and act, we stand in the tradition of our rebellious forefathers and like them we rebel for a brighter future for our children and the coming generations after us.

The Connolly Youth Movement believes that now is the time to reignite the vision that was laid out in 1916. To once more call for the common ownership of Ireland by the people of Ireland. To once more demand and struggle for the unfettered control over our own destinies. How do we go about doing this? What must we do?

I began my words with words from Connolly, and that’s how I will end them.

A revolution will only be achieved when the ordinary people of Ireland, us, the working class, get up off our knees and take back what is rightfully ours.